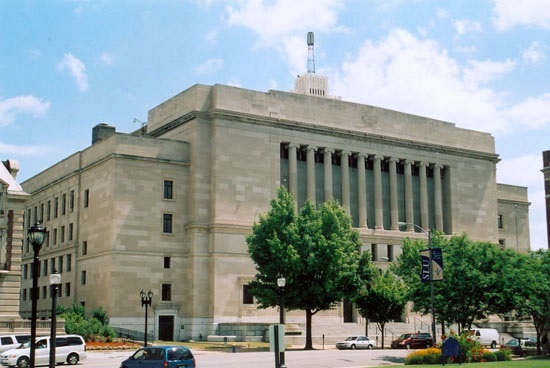 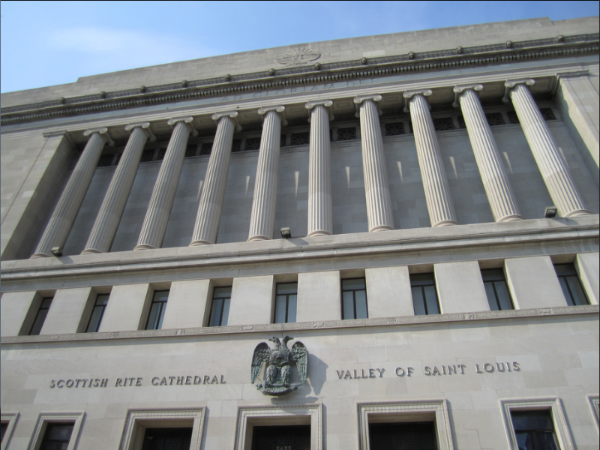 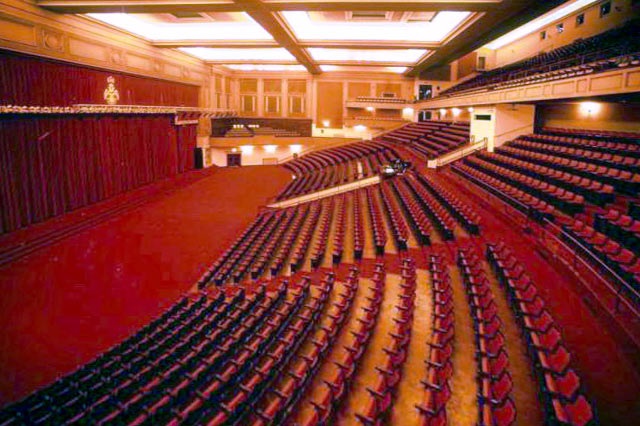 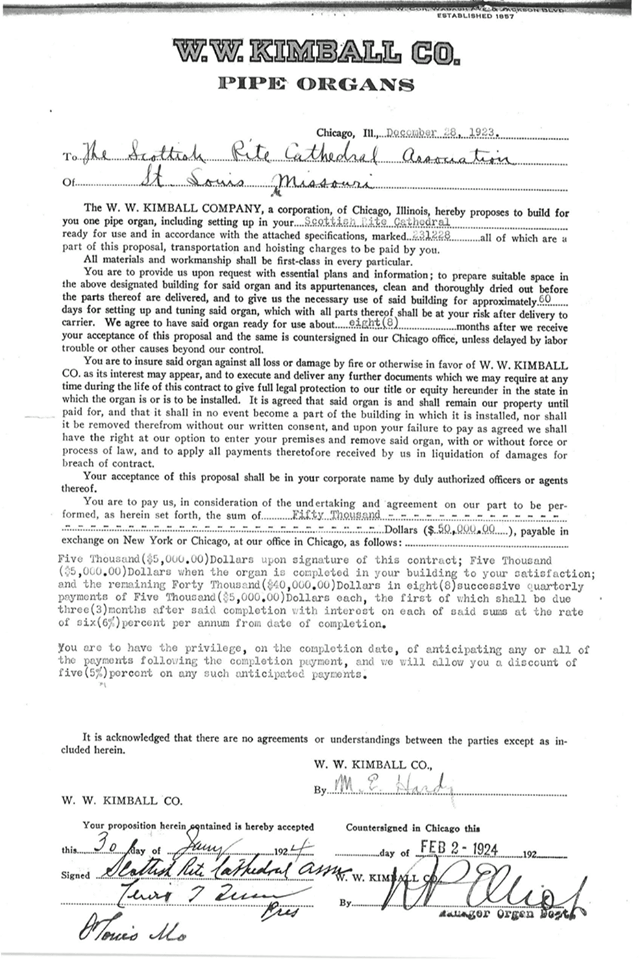 copy of contract for building the organ (CLICK PHOTO TO ZOOM) 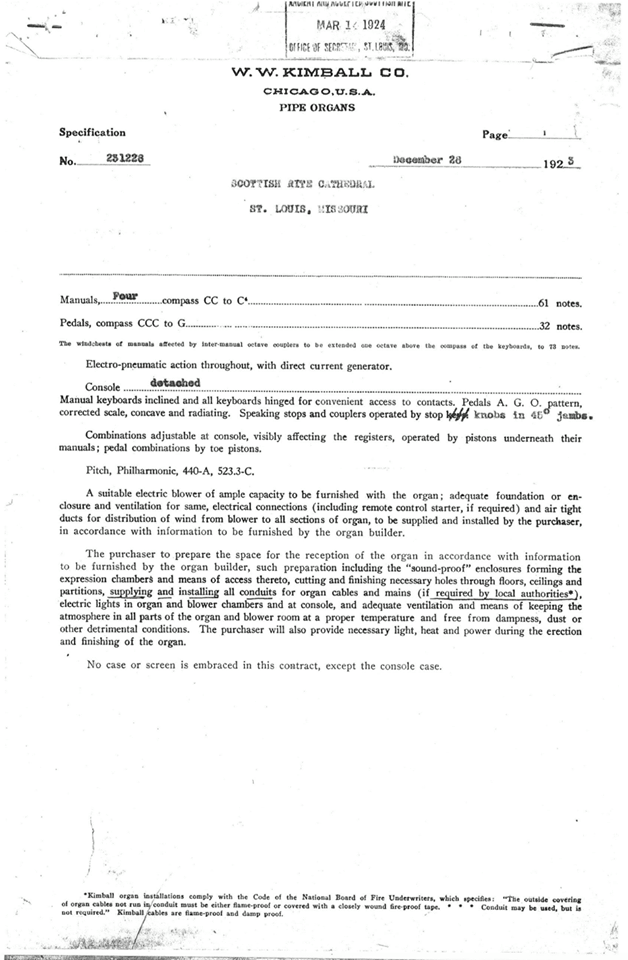 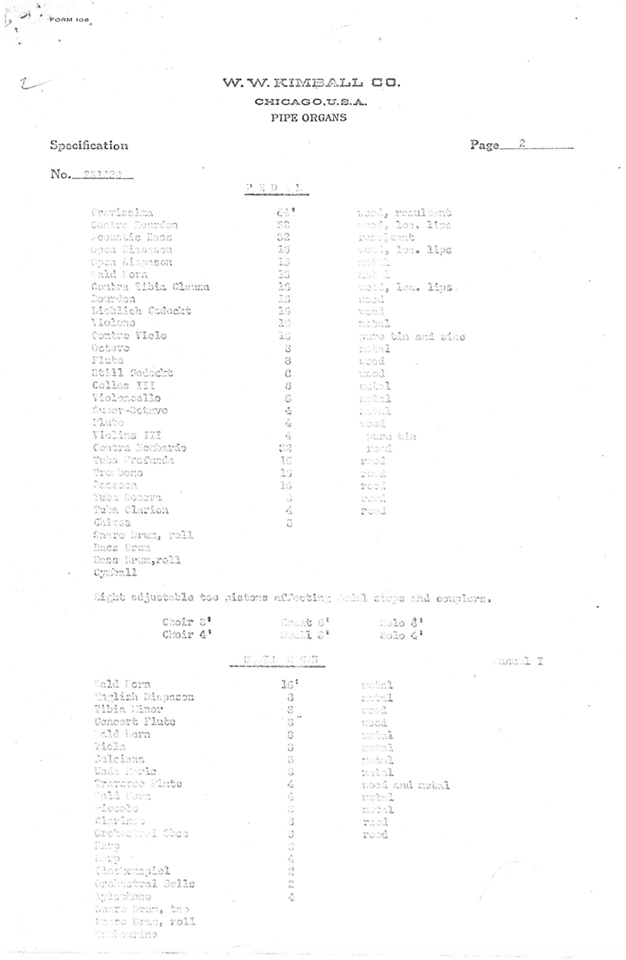 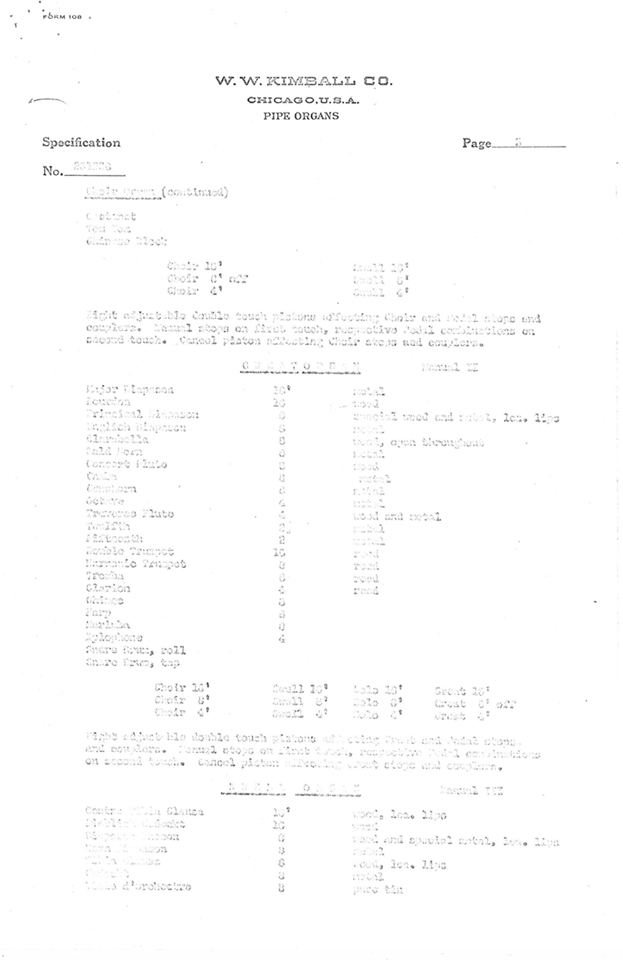 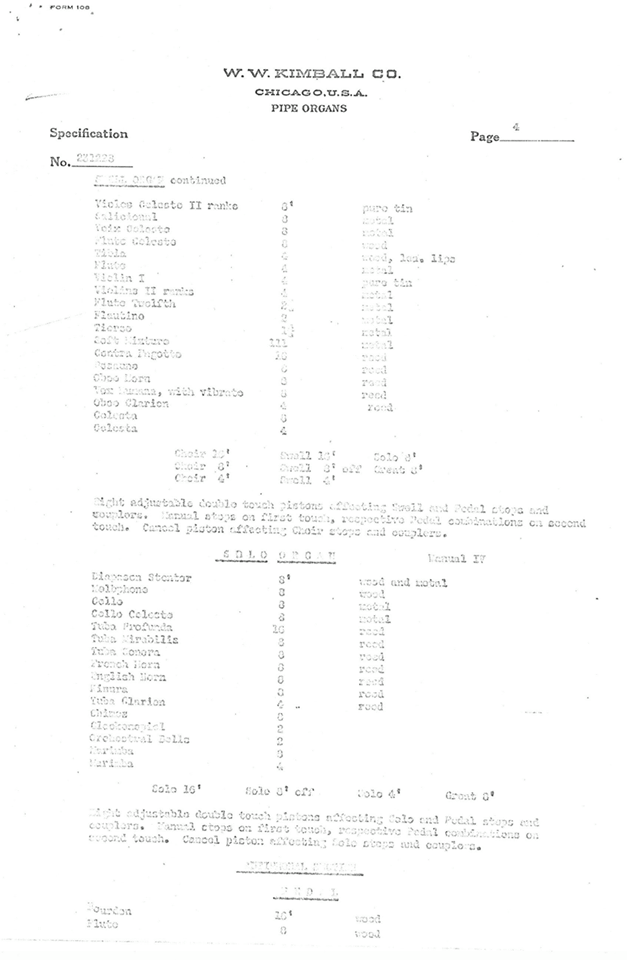 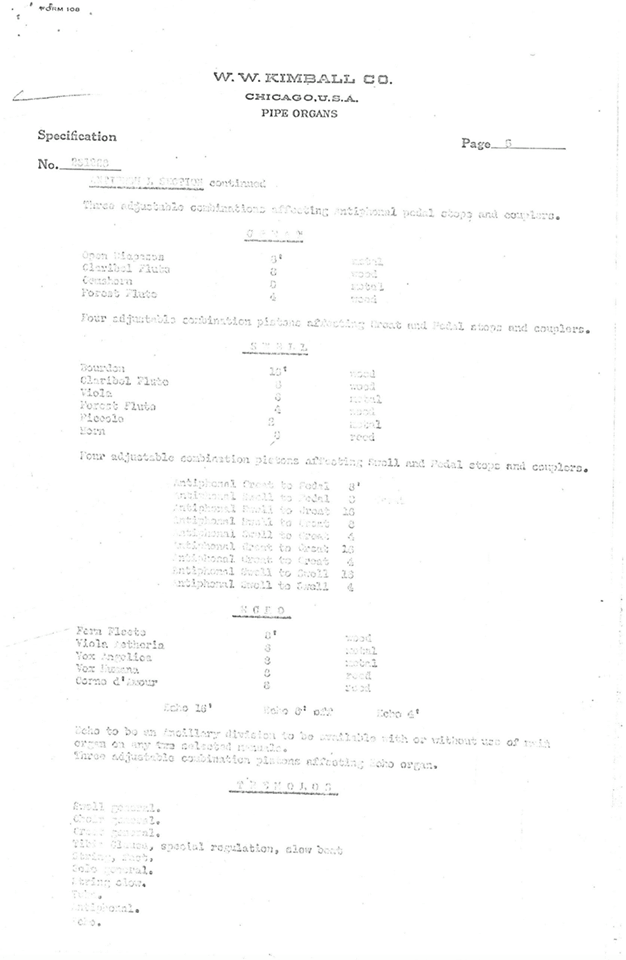 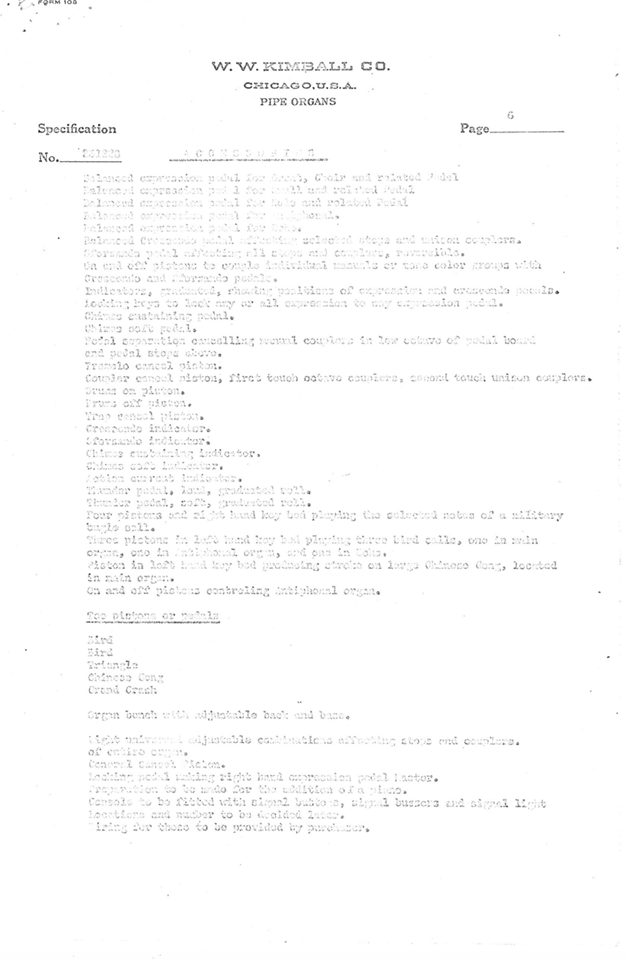 the rare and historic

of 108 speaking stops and 36 tuned percussions and traps

the earliest and SOLE SURVIVING SPECIMEN

of its type, by this builder

in its original location

LEFT IN THE ENTIRE WORLD.

A copy of the original contract for building this organ along with 6 attached pages laying out the specifics of its stops has been included on this visual tour for their historic significance.  The pages attached to the contract have faded considerably with time but with background light reduced are still readable and outline the disposition of the organ.  All of this was drawn up in late 1923 by the Kimball Company in consultation with tonal design consultant Dr. Charles Courboin and the Scottish Rite Association of the Saint Louis Valley.  It seems likely that, during this consultation process, Kimball officials were told that the Association had up to $50K to spend on an organ, since the contract specified that exact amount.  The actual cost came in just under that, at $47,805.34, evidently due to the Association anticipating the remaining payments by paying the Company in full and applying the discount specified in the terms or the contract.

The Scottish Rite Cathedral in Saint Louis was built in 1924 at a cost of $4M at the time.  Designed by architect William B. Ittner, its immense size, proportions, and architectural design makes it the largest Scottish Rite Cathedral in the world.  Its multiplicity of tall rooms, spacious hallways, innumerable doors, and both well-traveled and off limits passageways scattered throughout 257,196 square feet on 6 floors reveals a structure of immense proportions.  The frontage on Lindell Blvd. is 235 feet with an average depth of 175 feet.  The height from street level to roof is 104 feet.  The great height of the Auditorium permits with a 3rd floor choir balcony and 2 mezzanine floors above that -- one on 4th floor ("Balcony") level and one on 5th floor ("Gallery") level -- thus making 5 floors above Dining Room level.

In passing through the great bronze doors ornamented with emblematic designs and up a short flight of stairs one reaches a spacious lobby or main floor.  It is here that the general offices of the Rite are housed and the entrances to the Auditorium are located.  This main floor is the 2nd floor above Dining Room level and connects with the 3rd floor of the parking garage at the rear of the building via a skywalk.  The lobby is 166 feet long and 23 feet wide.  The Auditorium which is entered on this level is 165 feet wide east to west, 130 feet long north to south, its great height is 58 feet from floor to ceiling, and it seats 3200.  The stage on the north side or the Auditorium is 98 feet long, 4 feet longer than the Hippedrome stage in New York City.  On this stage 480 military personnel in uniformed formation can be placed.  The stage is supplied with a 40 foot high red velvet curtain called the Grand Traveler and 164 changes of priceless, hand painted canvas scenery suitable for the Rite's degree work.

On the east side of the Auditorium is the Candidate's Room, 35 feet by 85 feet long with a height of 25 feet giving a sense of dignity and spaciousness.  The seating capacity is 600 persons.  This room has been the traditional meeting place of the Class and of the officers of the Four Bodies where final instructions are given for the degrees or for the annual installation of officers, respectively.  It communicates on one side with the skywalk doors leading to the 3rd floor of the parking garage through which people routinely enter and exit the building.  On the west side of the Auditorium at floor level are 2 dressing rooms between which is the Wardrobe Room fitted with specially designed cases for housing the hundreds of robes, costumes, and associated paraphernalia used in the degrees.

The Lounge and Library are underground and may be reached by going down a short flight of stairs from the main entrance on Lindell to the 1st floor (above Dining Room level).  The Lounge is open daily for members and visitors.  It is 55 feet wide and 166 feet long with smaller rooms at each end (The Billiard Room, the Card Room, and the Ladies Lounge used by the Scottish Rite Woman's Club meetings, etc.).  The Lounge is beautifully decorated and furnished with restful chairs and tables.

The Dining Room is located further underground on the lowest level (one level below the Lounge), is 101 feet by 230 feet, and can provide for feeding 2 thousand people at tables.  The kitchen is at the rear and is practically a 2 story room.  It is 96 feet wide by 48 feet deep.   Here are assembled cooking and serving equipment sufficient for preparing a full banquet requiring about 3 tons of foodstuff.  This lower level also has a spacious meeting room where the Four Bodies and Preservation Association regularly meet.  The various floors, or levels, are numbered always in reference to this underground Dining Room, thus the Lounge and Library are situated on the 1st floor or level, the Auditorium is on the 2nd floor or level, the choir balcony is on the 3rd floor or level, etc.

A world class, one-of-a-kind symphonic pipe organ was tonally designed for this vast building in December 1923 by the acclaimed Belgian-American concert organist Dr. Charles Courboin and was constructed the following year by the W.W. Kimball Company of Chicago.  Construction began on this instrument in January 1924, it took 8 months to build, and it was installed in October 1924.  Its unique design fills the following offices:  1) to lead the Scottish Rite choir, support congregational singing, and accompany vocal soloists, 2) to provide individual color voices and effects for the degree work, 3) to blend with a full symphony orchestra, even take an entire symphonic score upon its shoulders if called upon to do so, 4) to perform solo transcriptions of works originally written for instruments other than organ, 5) to perform arrangements of traditional melodies, 6) to perform the standard repertoire in an acceptable, if not stylistic, way, and 7) to accompany silent motion pictures if called upon to do so, all the while being capable of filling a space of over one million cubic feet with sound.  To do all of this, the instrument was voiced on high pressure and equipped with electropneumatic action, 45 degree angled stop jambs, 4 manuals, 144 stops distributed in 9 divisions, 53 ranks, and 3,863 pipes distributed on 3 floors among 3 spatially separated chambers.  It was provided with, among other things, some beautiful foundation stops and celestes, some highly imitative orchestral voices, many orchestral percussion sounds, traps, special effects, and 11 tremulants.  About half of the pipework was placed on unit chests, the other half on pitmans, and it was given a definite theatrical side with 21 ranks or 43% of the total pipework being theatre-styled voices.  Finally, in imitation of the grand symphony orchestra, all divisions were enclosed thus rendering the entire instrument, from top to bottom, fully flexible and expressive.

This organ was granted citation status for historic merit by the Organ Historical Society (OHS), which is the highest level of recognition the OHS may grant to a rare and precious instrument.  It was nominated for this recognition by this writer in 2002, and a citation (No. 291) was issued the following year in 2003.

One's first impression when sitting at the bench of this colossal affair is that the console is comfortable, like sitting in half a football stadium, well-upholstered.  The enormous wall of drawknobs on each side and the wide double row of tilting tablets across the top are imposing.  By having its entire tonal forces situated behind tone grilles and a vast number of 128 swell shades which can be operated all at the same time to nuance the music, one quickly realizes that this is no ordinary organ, that it's truly a musical instrument which can express the entire range of human emotion and sensitivity at the touch of a key.  One also gets the sense that playing a pipe organ like this isn't merely an aesthetic experience.  It isn't just something somebody does because they like it, rather it's attached to something sublime, something profound.  Keeping an instrument like this fully playable also isn't merely a matter of giving to a noble project for that space exclusively, but it's something more broad than that -- it's supporting great organ music which spans hundreds of years, music will be heard by countless numbers of people indefinitely into the future.

The organist is immediately impressed with its unique and complex tonal design, wide dynamic palette, striking color stops, its pipe placement which makes it sound like a much larger instrument than it really is, its expert voicing, and that its pipe placement is not readily apparent when entering the Auditorium.  When this organ was built the Kimball Company employed some of the finest technicians and pipe voicers in the country and, rank for rank, was the most expensive builder in the world.  This organ manifests a quality of construction and a style of organ building that the world in general, and the United States in particular, is not likely to ever see again.  Against an ample background of foundation tone and an 8-rank string chorus has been placed a wealth of delicate, ethereal sounds, imitative orchestral string and reed color, colorful flutes, and some extremely big chorus reeds.  The result is just as responsive as a symphony orchestra while having a range which exceeds it.

One also notices what is plainly obvious -- that this an awful lot of organ.  The Main chamber is barely large enough for half the organ it contains.  With every one of its speaking stops including its stupendous Pedal Bombarde enclosed, it can raise a crescendo which very few have ever heard emerge from an organ.

Another thing organists will notice is that the pedalboard is slightly different from the Guild standard set in 1933.  It was constructed on a slightly larger radius of curvature and has a little less radiation with a relatively deep key fall -- more like a Wurlitzer of the day.  A little practice with this pedalboard is needed in order for the organist to get a good sense of how it "feels" to depress the keys and reach both extreme ends with the feet.

People who have never tried to do it just do not know what it is really like to play a fully expressive pipe organ of this size and description.  There's nowhere else on the face of this earth where one human being can be seated at an instrument and have this amount of tonal spread and this amount of power, save for a pipe organ of the same size and disposition -- or larger.