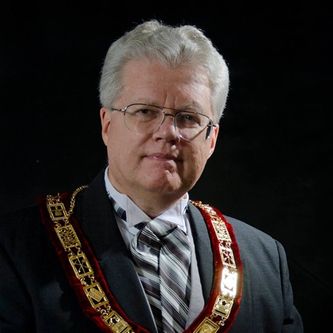 The creator of this website was born at a very early age in Saint Louis, Missouri.  When he was only a year old his parents moved to the city of Affton in the Saint Louis Metro area where he grew up.  Upon graduation from Affton high school with a diploma of special distinction he attended Southern Illinois University at Carbondale where he earned a baccalaureate degree in physiology.  He continued his education at Washington University in Saint Louis where he graduated with the degree of Doctor of Dental Medicine and practiced as a trusted and respected doctor of dentistry in Missouri for over 4 decades until his retirement.

At the age of 13 without any outside persuasion or prior musical concernment whatsoever Dr. Monrotus expressed an interest in playing the Organ.  His teachers, all of whom are now deceased, included Robert Thompson, James Frazier, Gregory Cohn, Henri DeKiersgieter, and Dr. Mario Salvador.  During his teen years he was heavily influenced by his friendship with and the dramatic and extended song arrangements of world class theatre organist Don Baker.  Much later in life he resumed intensive private instruction with his mentor, John Weissrock, at the Church of the Gesu on the campus of Marquette University in Milwaukee, Wisconsin.

Dr. Monrotus is a member of Saint Louis Chapter of the American Guild of Organists (A.G.O.), Saint Louis Theatre Organ Society, and American Composers Forum.  He is a founding member of the Panel of Advisors for the Committee on the New Organist (CONO) of the A.G.O., and his travels have taken him to or through 35 States and 2 Canadian provinces to perform at over 40 Masonic venues.  In 2013 he became webmaster of OrganBench, an online learning resource offering encouragement, guidance, and teaching from a Christian perspective what students need and to know to be able to perform at the organ and compose for it.  Having been blessed with well over 650K visits to date, this website has become a widely used educational tool.  He also has written to the glory of God over 3 dozen original compositions for Organ grouped into 6 major collections.  Besides contributing to the contemporary repertoire these pieces have instructional and practical use and may be employed either before, during, or after a worship service.  Individual scores are available for digital download and printing from

Today we hear many voices promoting their own talking points, one of which, in effect, is that digging through the chronicles of history for anything pragmatic and applicable to the free-wheeling society of today is generally of little worth if not a complete waste of time.  Sadly, the creative arts have been exposed to that same persuasion despite the reality that the studying and learning what has come before is implicit, distorting or trying to erase it has tangible effects, and nothing from any age is devoid of interest in which the operation of a quick imagination is discernable.  Anyone composing for Organ these days is writing for a medium whose core repertoire spans hundreds of years and is automatically entering into a dialogue with the past and having enduring works for models.  This parley with the past inevitably leads to the inference that nothing in music discloses a more powerful and constant stimulus to the imaginative faculty than contrapuntal methods of tone association.  The argument that counterpoint IS the arterial life's blood of music therefore would not be a difficult one to make.  And, since the Organ is essentially a polyphonic instrument and polyphony is merely the product of the employment of the contrapuntal method, it follows that fugue, the most elaborate of contrapuntal processes, takes precedence as THE Organ piece par excellence.  It should therefore come as no surprise, just as woodworking should figure prominently in the output of a carpenter, that contrapuntal figuration and various modes of imitation including canon, fugue, fughetta, fugato, and invention procedure should figure prominently in the music of an emerging composer who writes for this instrument today.

None of the fugues in these collections are classified as "simple fugues" because this term implies no recurring countersubject.  All of Dr. Monrotus' fugues are in fact supplied with at least two recurring countersubjects, and many have three.  Because each fugue subject and its multiple countersubjects take turns entering at least once in the bass, each fugue is thus written in either triple or quadruple counterpoint.  Relatively long subjects, short codettas linking entries in the opening exposition, and short episodes generally of equal length linking all subsequent entries permitting a rapid and weighty development are rather consistently employed.  These stylistic features combine to give his fugues a signature construction and sound.  One of them (Op. 20) is supplied with a counterexposition, but others make moves which are far bolder, undaunted, and unexpected:  four are supplied with redundant (5th) entries during which all 4 moving lines either are inverted (Op. 18), modulate to the relative key (Op. 22, 31), or modulate a whole tritone distant from the home key (Op. 33); another (Op. 11) is a double fugue in which the 2nd subject is introduced using invention rather than fugal procedure and carries on with a countersubject that exists in 2 forms, both of which reappear in the final combinatory section.  Certain pieces are also thematically related:  for example, the subject from Op. 26 is the Op. 25 subject inverted -- the Op. 33 subject is the Op. 32 subject inverted -- the 1st countersubject from Op. 28 is the Op. 27 subject inverted.  The theme of the Op. 5 Prelude and the subject of the Op. 6 Fugue also were both derived by rhythmic transformation (same pitches, different note values) of the main theme from the Op. 4 Variations.

This music may be sampled on this website in slide show form or as live YouTube video recordings.

[See subpages on this Bio/Works page]

PLEASE NOTE:  Those who love polyphonic tonal music in this style built upon chord relationships with no ambiguity of key also should revere the impulse that would push one to the edges of tonality, if not beyond.  A good deal of music of great beauty has been written within regions of musical space where the tonal fences are shaky but still standing, and some composers have pushed their music successfully into tonally rarified atmospheres well beyond that.  Art forms destined to have a future subsist on energy innovation like this -- in the case of music by keeping the best from the musical language of composers from the past and doing something different, interesting, and unexpected with it that nobody's ever heard or tried before.  At the same time, with music today being divided into the sad dichotomy of tonal versus atonal, the temptation to view through a preferential prism more recently composed musical works which either strictly obey or tend to drift from traditional rules of tonal grammar and syntax and to weigh them too early in their life before they have withstood the test of time also seems to be ever-present.  But for those who believe that new music should be cogent, concise, contrapuntally savvy, listener-friendly, definitely of our time, and weighed by its discernable formal architecture, the quality of its thematic material, the bold moves it makes, the speed of its harmonic rhythm, and how it stands up under usage, such scores, often considered by their composers are mere trifles compared to the masterpieces of others, have been known to appeal to a broad group of musicians and music lovers over a span of time, cultures, and places, to have a life beyond their original premiere, and possibly labored over, loved, interrogated, and admired by future generations.