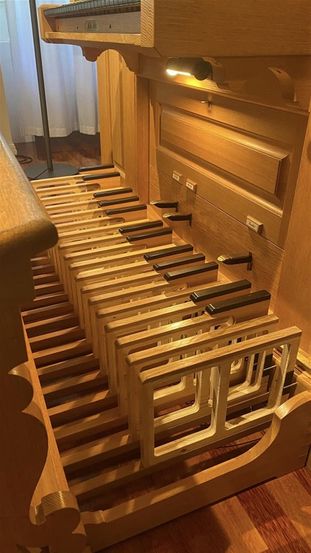 Vertical pedal extensions have been created by organ builders as optional add-ons to facilitate the pedal playing of very young performers or adults with very short legs.

Such sets of add-on overpedals appear to work best with the parallel concave pedalboard, are typically fabricated along exaggerated concave lines, and are designed to raise substantially -- up to one foot -- the playing surfaces above the level of the pedal keys provided by the builder.

Even though screwed to tightly grip the underlying pedal keys, such extensions are reported to be easily swapped out.

The examples of overpedals depicted in the photo (left) were constructed by Swiss organ builder Peter Meier of Rheinfelden, Switzerland, extend up to F, and have been approved for use by the Conservatoire de Lausanne.