Getting Started With Writing, Part XLIV 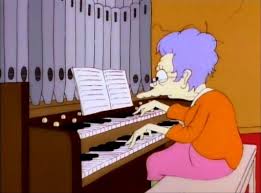 The word "accessible."  It means different things to different people.  It seems self-evident, but it's nevertheless important, when we're writing new organ music, to remember to make it playable by the overwhelming majority, if not all, organists.  No one needs to be reminded that the organ, like any other keyboard instrument, typically produces the entire totality of its sound by being operated by just one person.  That performer, in terms of learning and mastering the many departments of skills required, is always and forever a work in progress.  Performers who might be interested in our music come to it with their skill levels all over the map.  For a goodly number of performers, too much art in a piece of music can kill it (photo).

What does this mean?  For starters, not everybody finds every key signature "accessible."  Extreme keys (those with 5 or 6 sharps or flats in the signature) may be difficult for some players to read.  Part of it could be related to the assumption that every instrument on which our new music will be performed will be tuned in equal temperament.  The historic pipe organ in the building at an organist's disposal may be tuned in a meantone or circular temperament that makes the primary chords in the extreme keys sound harsh [See Blog, Temperaments and Tuning, Parts I-V].  If our new piece can be composed in a key with fewer sharps or flats, unless we have a definite, meaningful objective in mind for doing so, do we really need to select F# Major or e flat minor as the home key?  It's a fair question.

There are so many cautionaries in music, but, for the composer, the tendency to jam-pack every page of a new score with as much art as possible needs to be guarded against.  Never is a long time, but some tremendous artistic accomplishments from the recent contemporary organ repertoire, animated four-voice fugues in particular, may never be heard by the public because, for the vast majority of organists, the score, while commendable for its intricate  workmanship, is not all that approachable, employable, or usable.  A big part of the "art" of composing consists of deciding what we DON'T want to include in the score.  The composer may need to rethink the first thing that suggests itself and consider a more accessible way of describing the same idea in musical terms.  After this is combed out, whatever remains is usually what's best to commit to the score.  For the clever and imaginative composer who composes entirely from the mind, away from the instrument, this is not as easy as it sounds.  Even when we're occupied composing a new work in homophonic texture, we don't want to forget to include some passages without pedal.

In a way, composition is the art of omission.  The trick is to write music that's operable and practicable to learn but doesn't sound of lesser quality.  The organ compositions of Vidas Pinkevicius and Phil Lehenbauer are very instructive in this respect and excellent models to emulate.  When we compose it always helps to imagine our ideal listener and performer.  Writers also imagine their ideal readers when they write.  This way, when we're composing, we're not looking for an audience for our art, but looking for art for our audience.  Big difference.