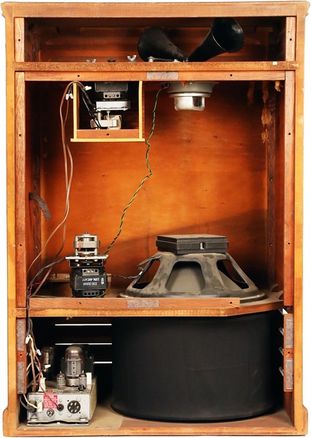 In the pantheon of famous inventors the name of Donald Leslie (1911-2004) must surely be included.  He was the creator of the ingenious rotary speaker system which first refined the sound of the Hammond organ, helped popularize electronic music, and, in some applications, was destined to be employed in godly praise and worship.  While the authorized loudspeaker enclosure to use with a console Hammond organ was the Hammond Tone Cabinet which housed an external vacuum tube amplifier and speaker in a cabinet, many players today prefer to play the Hammond organ as well as many others through this newly created rotary speaker system which came to be known, after several name changes, as a Leslie speaker.

The typical Leslie system is an integrated speaker/amplifier combination in which sound is emitted by a rotating metal horn over a stationary treble compression driver and by a rotating baffle beneath a stationary bass woofer.  The constantly changing pitch shifts that result from the Doppler effect created by the moving sound sources is what generates the characteristic "Leslie" effect.

After the Hammond electric organ had been invented in 1934 and went into production the following year, Donald Leslie bought one for his home in 1937.  He was disappointed however with how it sounded in his home compared with the big showroom where he bought it.  Being an engineer himself he decided to try making a speaker cabinet that would improve its tone.  After much experimentation he decided that a rotating speaker baffle or horn which divided the treble and bass signals gave the best results because the Doppler effect this arrangement created enlarged and projected the sound 360 degrees and gave it more of a theatre organ Tibia tremulant effect.  He also discovered that the effect varied depending upon the speed of the rotors which could be toggled between fast (tremolo) and slow (chorale) using a console half-moon switch or pedal switch, with the most distinctive effect occurring as the speaker rotation speed changed.  The motor speeds he finally settled on were 50 rpm (chorale) and 400 rpm (tremolo) for the rotating horn of the treble compression driver, and 40 rpm (chorale) and 340 (rpm) for the rotating drum of the stationary bass woofer.

By 1940 Leslie had a prototype of his invention ready to market and showed it to Laurens Hammond thinking the latter could be keenly interested in selling it as an add-on to the Hammond organ.  Strangely however, Laurens Hammond expressed no interest in it [See blog, The Hammond Organ, Part III].  Evidently the latter felt that the Hammond console's vibrato effect expressed through the stationary loudspeakers of the standard Hammond Tone Cabinet was perfectly adequate, as is.  It's possible that he imagined that Leslie's invention not only was superfluous for the Hammond organ but posed a threat to the continued sale and production of Hammond Tone Cabinets.  It's possible that the idea that anyone else stood to advertise and turn a profit from a Hammond add-on besides Laurens Hammond may not have set well with him.  That he was in denial about something consequential being engineered without the Hammond Organ Company which improved a product which bore the Hammond name is also a possibility.  Whatever his reasoning was, Laurens Hammond refused to cooperate with Leslie, so Leslie was left to manufacture his invention himself, and for this purpose he founded his own company, Electro-Music.

By teaming up with Leslie the demand for Hammond organs likely would have increased to the benefit of both parties, but, curiously, after this encounter with Leslie, Laurens Hammond went to great lengths to defeat Leslie's invention, even to modifying interface connectors on his newer Hammond models to be "Leslie-proof" and forbidding Hammond dealers from selling Leslie's speakers ... which seems all the more strange considering that this went on at a time when America was still feeling the effects of the Great Depression, and the music business, like any business of the time desperate to compete for the consumer dollar, had to be keenly interested in innovating its products and services just to survive financially.  History shows that these efforts by Hammond to deliberately sabotage sales for Leslie backfired; Leslie was able to quickly engineer a workaround, and, to counter Hammond's slogan "Music's Most Glorious Voice" he came up with "The Pipe Voice of the Electric Organ" for his newly invented speakers.  While all of this afterwards did nothing to endear Donald Leslie to either Laurens Hammond or the instrument which bore the latter's surname, Leslie continued to manufacture his speakers to work with the Hammond organ.

Leslie's company went on to produce his speakers in a very wide variety of sizes, styles, and designs dictated by how the newer analog electronic organs coming out of various American factories during the 1940's and 1950's were being configured.  Leslie began designing his rotary speakers to work with just about every other make and model on the market in fact, right through the heyday of the home electronic organ of the 1960's and well into the 1970's -- brand names which included Conn, Lowrey, Wurlitzer, Thomas, Baldwin, and Gulbransen -- an unprecedented and signal achievement of 20th century electrical and audio engineering for which Leslie, during the course of several years, took out nearly 50 patents.

The final version of Leslie's external speaker cabinet (photo) typically housed 1) one or more 60-, 100-, 200-, or 300-watt vacuum tube amplifiers usually situated in a bottom corner of the cabinet, 2) a bass motor and 12-inch or 15-inch stationary woofer physically mounted in the spring rotor over a rotating baffle, or drum, located also in the bottom half of the cabinet, and 3) a rotating metal horn, treble motor, crossover, and stationary treble compression driver mounted in the top half of the cabinet.  Sized-down versions having the same configuration of components also were developed.  Leslie's company cooperated with several manufacturers which expressed interest in including a small 2-speed built-in Leslie in selected models of their organs.  Such "built-in Leslies" were controlled by the manufacturer's own stop tablets.  The Conn Company, for example, routinely supplied a pair of stop tablets labeled "Tibia Tremolo" and "Tibia Celeste" to control the 2 speeds of the built-in Leslie in its organ consoles with the fast speed wired to override the slow speed with both tablets depressed (the Vox Humana in its theatre organ models played through the Tibia Leslie channel as well).  Conn organs also had an additional pair of stop tablets, rocker tablets, or switches built into the console as a courtesy which were labeled "External On" and "Console Off" anticipating a future addition of a free-standing external Leslie cabinet.

Leslie's company was sold to CBS (who also owned Gulbransen) in 1965 and, ironically, following the death of Laurens Hammond in 1973, in a move which would have had Mr. Hammond spinning in his grave like one of Leslie's rotary horns, Leslie's company was acquired finally by Hammond's company in 1980, at which time Donald Leslie retired.  By then the list of Leslie's speaker products had exploded, as stated, into a myriad of different sizes, styles and designs and were the undisputed add-on speakers of choice across all makes and models in the electronic organ field.  The Suzuki Musical Instrument Corporation of Japan acquired the Hammond and Leslie brands in 1991, and Hammond-Suzuki currently markets a variety of speakers under this name which are built upon Leslie's principles.