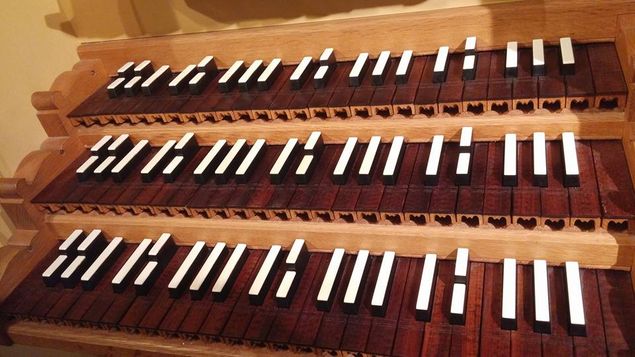 It is sometimes possible to tell by looking at the keyboards of an older historic organ the sort of tuning/temperament for which it was built.This photo, for example, shows a 3-manual Renaissance organ keydesk having a compass of four octaves, a broken octave in the bottom with split sharps at F# and G#, and split sharps in the midrange at Eb.Old historic instruments were commonly tuned in 1/4 (quarter)-comma meantone temperament [See blog, Temperaments & Tuning, Part IV], and in these instruments the bottom octaves of the manuals typically were provided with a short octave with split sharps.In this particular instrument (photo) F# and G# keys also were provided for the short octave at the bottom and throughout the manual compass, indicating that this organ was most likely built to be tuned in meantone but in a way in which more sharp keys were usable than in quarter-comma -- something such as 1/5-comma 1/6-comma meantone ("Silbermann temperament"), for example.In this console (photo) the keys are stained in reverse with a very dark brown color for the naturals and with the sharps being black below but white on top.If we imagine, however, that the keys were colored as normally found in standard keyboards (i.e., naturals white and sharps black), the first white note (E) at the very bottom would be C.Next above it is F.The black note behind F# would be D.The black note behind G# would be E.In the midrange octaves the black note behind Eb would be D#.