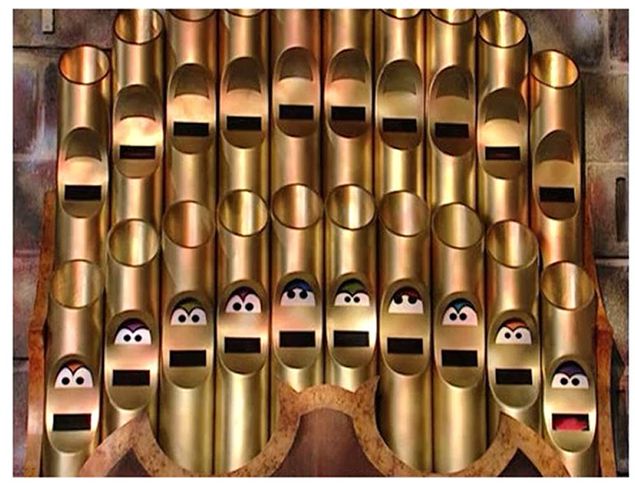 By way of review, there is a little more to pipe organ sound than meets the ear ...Any musical note has 3 basic qualities: a) pitch (frequency), b) timbre (harmonic content), and c) intensity (loudness).Pitch is easy to explain: today we define middle C on a piano as 261.625 vibrations-per-second (Hertz, or Hz); the lowest note on the organ at 32-foot C is about 16Hz and the highest about 15,800Hz, which is the widest range of any musical instrument.Timbre describes the quality or color of a sound; an Oboe and a Flute may be playing exactly the same note (pitch) but no one has any trouble distinguishing the two instruments; the tones have vastly different harmonic content -- a harmonic (also known as a harmonic upper partial tone, or overtone) being simply a multiple of a fundamental pitch.If, for example, the fundamental pitch, or 1st harmonic, is 100Hz, its 2nd harmonic (1st overtone) would be 200Hz, its 3rd harmonic (2nd overtone) is 300Hz, its 4th harmonic (3rd overtone) is 400Hz, and so on.We find from this that the pitch number of every organ stop represents either a fundamental or a harmonic of a fundamental.We also note that pure tones (fundamentals only) do not occur in nature; anything vibrating -- a piano string, organ pipe, or whatever -- does so at multiple frequencies; this is a good thing because without harmonics the wondrous variety of the sounds in nature would not exist.Intensity, or loudness, is also easy to explain: sound travels in pressure waves similar to waves in the ocean; there are big waves having high amplitude, and there are little waves having low amplitude; our ears perceive these differences in amplitude as loudness or softness, respectively.Careful examination of the sound produced by organ pipes reveals a number of other factors which, although some are small, contribute to that distinctive pipe organ sound.Firstly, organ pipes do not start to speak instantly (a feature known as attack), nor do they stop speaking instantly (a feature known as decay) -- and different sizes and types of pipes have their own individual speech characteristics; these qualities are collectively called "envelope."When the valve snaps open under an organ pipe upon a key at the console being depressed the pipe does not initially speak at exactly the proper pitch -- it may overshoot by quite a lot and create a noticeable effect called "chiff."In certain types of pipes -- a wooden Gedeckt, for example -- this is an endearing quality and helps gives the stop its unique character; all pipes, even reeds, do this to some extent.While the pipe is settling down to its proper pitch the harmonic content is changing slightly -- these are called "transient harmonics."One other subtle factor is present in pipe organ sound -- noise.Wind-blown pipes produce a certain amount of wind noise; one may not be aware of it when listening, but, without the wind, the tone would be lifeless and plastic; again, different types of pipes exhibit differing amounts of noise creation.So, the pipe organ is like a huge choir of one-note singers -- each pipe produces only one pitch, but it sings its one note in a most individual and sometimes eccentric manner, which is why making an electronic counterfeit having a truly realistic pipe organ sound is literally not as easy as it sounds.