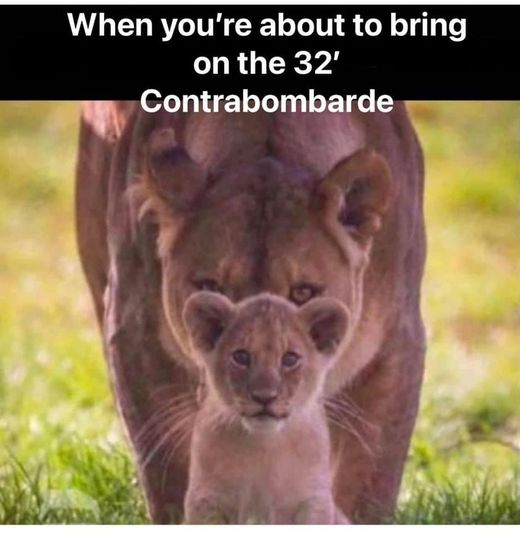 The scientific community is in agreement that the human ear can detect determinate musical sound in the frequency range of 40Hz-20kHz, this 40Hz lower limit being equivalent to the lowest E of the string bass of the grand orchestra, which equates at the organ to the E1 in the 16-foot octave.Since the bottom 16 pipes of a 32-foot organ stop generate frequencies below that lower limit, the massive vibrations of their fundamental prime tones are felt but technically not heard by the human ear as determinate musical pitches.NOTE: typically such stops, when present, play only from the Pedal but have been duplexed at times to the primary or secondary manual divisions of large and important instruments. Their function is to provide gravity and, depending upon their construction and voicing, to more or less enrich the harmonic structure by generating a series of harmonic upper partial tones, the pattern of which determines tone color or timbre, all of which sound with lesser intensity above the fundamental prime which determines the note's pitch.There would appear then to be no artistic reason to insert a stop lower than 32-foot pitch in an organ, although there are isolated instances where certain builders have done exactly that -- giving rise to the question as to what sort of music can be built around a rank of pipes whose bottom octave vibrates in the sound tombs of the 64-foot octave in the frequency range of 8Hz-16Hz -- not to mention that the 12 semitones within that octave sound over a frequency distance of only 8Hz where each of its extremely large and expensive pipes differs in pitch from its neighbor by less than 1Hz.The result is an unmusical noise which mimics a washing machine in its spin cycle, and, while it may succeed in flattering the builder and shaking the listener bodily, it fails to impress the musical sense [See blog, Noisemakers].The heavyweight 32-foot voice in the instrument most commonly reserved for the tremendous climax in the music, when supplied, is the biggest 32-foot reed in the Pedal division -- either the Contra Trombone, Contra Posaune, or Contra Bombarde.NOTE: the Bombarde is a reed stop of 16-foot pitch and powerful intonation having resonators of inverted conical form constructed of stout metal and to a large scale. It's commonly found in important French organs where it sometimes gives its name to a manual division, viz., "Clavier des Bombardes." Builders also have made this stop available at 8-foot, 4-foot, and 32-foot pitch. When voiced in its characteristic form the 32-foot stop is the roaring lion of the reed family (photo) and lets everything else in the pipe chamber know who's in charge.While in general such a commanding voice is used sparingly, some major organ pieces from the standard repertoire call for it to be drawn at the outset and for it to continue straight through to the end.It also occupies an important place as part of the crowning layer of sound in a massive crescendo where it acts as a sturdy tonal pillar in the full organ which holds up the enormous weight of tone above it.This stop therefore looms large in the mind of every organist -- as it should -- and, when sufficient space and funding can be made available for its introduction, builders would do well to include it.