The Plateau Of Latent Potential, Part I 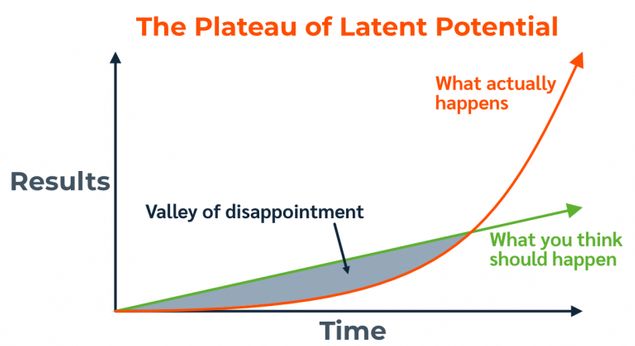 We have all heard this story many times ...The stonecutter hits the rock 100 times without even seeing a single crack in it -- then, he hits it one more time and the rock suddenly breaks into two, and that 101st hit is celebrated.Does that mean that the first 100 blows were useless ? ... of course not -- it was precisely the 100 hits before it that made the rock break on the very next hit.In terms of progress and performance there is often a delay between what we think should happen and what actually happens.This is described in James Clear's book "Atomic Habits" -- in it he discusses that delay, something which he calls the Plateau of Latent Potential or the Valley of Disappointment.Whenever we first start working on something we expect the results to be linear with our efforts, i.e. in line with the efforts we put in -- however, more often than not, it may take many weeks or even months to notice results.The results we get aren't linear because compounding doesn't work in a linear fashion -- it works exponentially, which is exactly why it's so powerful.The results work in an exponential curve which is very slow in the beginning and then starts exploding once we cross a particular threshold called the breakthrough point.All big things come from small beginnings, but, the sad part is, many of us give up before we get to this stage -- we observe our initial efforts not producing observable results and we give up sooner than we should.This is the death of any pursuit, not just organ playing.What we really need to understand is that it takes time to get solid results, and we should not get disheartened when we don't see those results initially.This is how habits work -- freedom in organ playing is gotten by repetition (practice) and keeping good habits going, these habits take time to accumulate and yield results, but, once those results start appearing, they are massive and usually beyond our expectations.Once we accept the idea that the smallest improvements, if consistently applied, will yield their moment of breakthrough, then complaining about not achieving initial success despite working hard makes about as much sense as complaining about an ice cube not melting when heated from 20 to 31 degrees Fahrenheit -- since the observable melting action is only going to happen one degree higher, at 32 degrees.The next time we don't see results right away we should never presume that our efforts up until then have been a waste of effort or that we're not good enough.The good habits we've maintained are still doing their job to accumulate rewards for the future.This is why coaches are absolutely essential -- the student working hard doesn't always see what the coach can see and may at first feel discouraged, disillusioned, or worse when results are not immediately forthcoming.It's the coach's job, in part, to explain that the Valley doesn't last forever and to encourage consistency and the promise of the coming breakthrough event.This is why we say ... to all those who have worked at it some and may be starting to think that they're unworthy and don't have what it takes ... "Stay with it. Results are on the way."Do. Not. Give. Up.(con't in Part II)