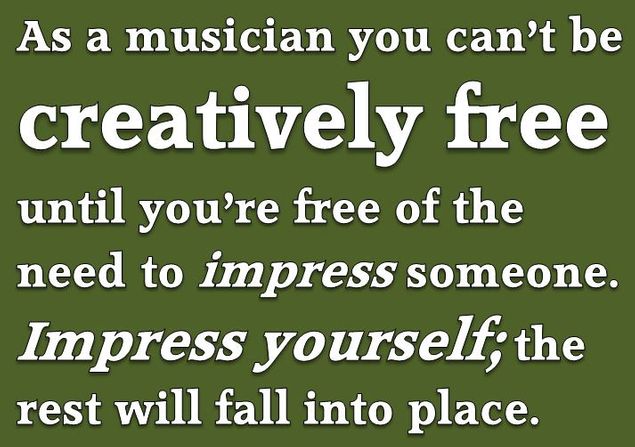 Among musicians there isn't a human being on the face of this earth who isn't at times subject to a case of nerves.In the case of a musician, the antidote for performance anxiety is to tune out the idea of playing something "perfectly" as if it were under some kind of microscope with every single move it makes.Instead, just play it -- with serving the music being uppermost in mind, not a room full of potential critics with their laundry lists of "sensibilities."Faultfinding, quibbling, self-appointed experts have been around since human civilization began; it was Aristotle who in the 4th century B.C. is credited with saying, "The only way to avoid criticism is to do nothing, say nothing, and be nothing."During performance the objective is to seek excellence, not some vague ideal of perfection (which is a mirage) -- at a level which will impress our own Self.But additionally, and more importantly, this freedom of the need to impress others with our playing is what opens the door for us to be creatively free.In 1934 Peter "Dale" Wimbrow wrote a now-famous poem illustrating this very thing called "The Guy In The Glass."Since then this poem has been recited innumerable times by countless people in ways which have introduced changes in the original wording but without altering its core message.As it applies to the male performer, one such rendering is as follows, and it is worth committing to memory:THE MAN IN THE GLASSWhen you get what you want in your struggle for Self,And the world crowns you King for a DayGo to a mirror -- take a look at yourself.See what that man has to say.For it isn't your father or mother or brother or wifeUpon whose judgement you must pass.The person whose verdict counts the most in your lifeIs the one staring back in the glass.You can be like Jack Horner and chisel a plumAnd say what a good boy am I,but the man in the glass says you're only a bumIf you can't look him straight in the eye.He's the fellow to please, never mind all the rest.He's with you clear up to the end.And you've passed your most dangerous, difficult testIf the man in the glass is your friend.You can walk through the world down the pathway of yearsAnd get pats on your back as you pass,But your final reward will be heartache and tearsIf you cheat the man in the glass.