Organ Building In A Nutshell 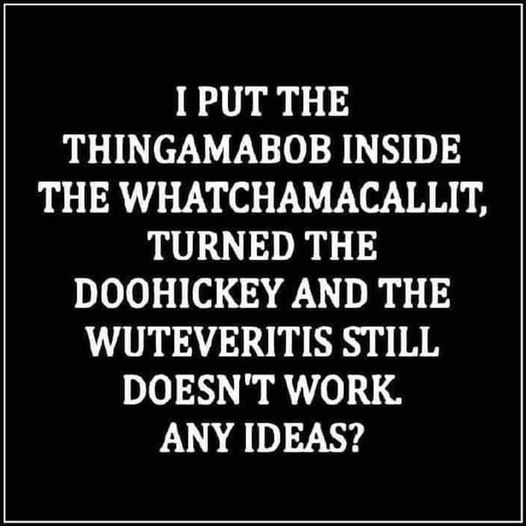 Figuring out what to do when something isn't working properly with the instrument isn't always the bugbear that it seems.A scenario like this one (photo) may call for a professional wisenheimer with a modicum of phraseology to cogitate the situation:The fix may be a mere bagatelle ... it might simply boil down to nothing but a loose screw somewhere.One disenthralled connection can run amok the whole shebang.In times past a brand new switch often effected a cure for getting an unruly, cross-grained doohickey to straighten out and fly right.A further adjustment might be needed however -- if things are still running irregularly a few hard taps with a hickory stick at the back end of the gonkulator has been known to effect a permanent fix.If all else fails the main gizmo inside the console might have to be disconnected from the hootenanny, taken behind the tool shed, and completely rewired from scratch -- otherwise all the little widgets on the rigamajig that moves the stops won't work, either.One doesn't always have to be a jim-dandy humdinger of a doyen to get a lalapalooza of a pipe organ working again.