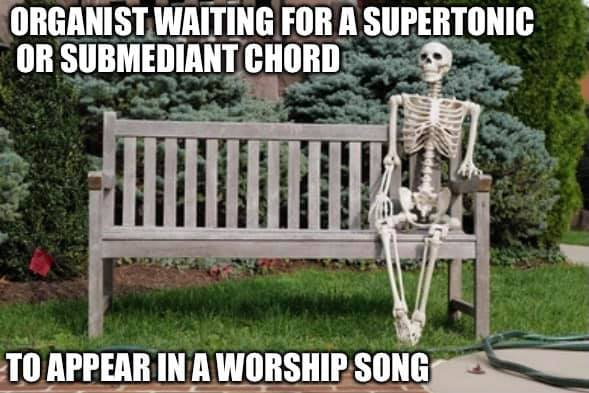 Some thoughts for organists about worship songs ...It cannot be denied that there are pastoral dimensions to what organists do at the worship centers where they may be appointed to serve, and church musicians often find themselves working closely with, if not taking on the role of, a worship pastor.Worship pastors who hear a lot of worship music after a time can begin to say that a fair amount of it sounds the same -- the same simplified style, format, harmony, instrumentation, build, and lyrics.Some worship songs strike them as mediocre ... not terrible, not abysmal, just more like (to them) a cookie-cutter, rubber stamped product of the Christian music industry.There are some worship songs that no one seems to love -- no one seems to hate them, they don't challenge anyone, and they don't raise any particular emotion, either; they aren't too noisy -- the guitars and other instruments are very smooth -- people more or less agree with the lyrics -- and the people playing them are all nice -- everything about them in fact is often just terribly, terribly nice.The trouble is, organists who have spent their lives learning to play and improvise freely and proficiently in various styles in any tonal region of musical space can feel the poverty in the music when it's always packaged and served up the same way, each and every time.They may and often do sense musical possibilities with the song which were never explored in the arrangement which might have contributed to bringing out everything the tune has to offer; additionally, when its workings always travel the same well worn grooves, the music doesn't fully connect with people who want songs with edge and attitude -- songs which challenge, closely reflect reality, and express real emotion in every range from total dark despair to uncontainable joy.Worship pastors after a time can grow a bit weary of hearing the same simplified harmony in worship songs and the same timeworn bromides about tongues confessing, lambs being slain, etc., time and time again.It can have organists in this situation a bit frustrated too and wondering if a) whether they've become too familiar with and desensitized to worship songs, or b) perhaps they unconsciously may have made the worship experience too much about themselves and their own likes and preferences.Whether or not organists working as church musicians should be critiquing worship songs the same way they would any other music, especially the standard organ repertoire which has consumed so much of their time and attention, is open to question.When organists critique worship songs they're not just judging the song's music and lyrics in an academic, detached, and distant sense -- they're also critiquing the writers of these songs, their revelation of God, and how they've recorded it.It's really no different than judging how the song's writer relates to God and how that person has chosen to describe in musical terms that intensely personal fervor and experience of theirs.And, whereas an organist might not particularly like the song being performed all that much or see any number of ways it might be honed around which weren't pursued, to someone else it could bring the words of life, just the way it is.Worship music is therefore a tricky thing to balance; while church musicians strive to give God their best musically -- which, of course, they should -- it's about much more than that.It's about drawing people to venerate and revere the one Triune God Who in the ocean of His wisdom uses a delicate balance of all involved in worship to have an encounter with Him.When writing worship songs it feels safer to employ the same old bywords and catchphrases for lyrics and the same simplified and banal harmonic progressions, over and over again, than to push forward into different poetic and harmonic territory.Worship song writers sometimes can give in to their own ambitions to try to write that blockbuster song however, one that they think everyone will be singing in the summer conferences, but they also can come up with something like that for the wrong reasons.They also can try, with the wrong motives, to write merely what the publishers are after to advertise and sell for a profit.They also can be tempted to try to imitate the work of other successful song writers who have made a name for themselves in the field instead of studying those models for their educational value and leaving it at that; organists should never try to imitate someone else's style -- they need to find their own way of arranging and expressing how the music strikes them and what is in their hearts.No one is an exact replica of anyone else, nor should they be.This applies to worship song writers as well; a fanatical obsession to imitate can turn worship song writing into nothing more than an exercise or maybe just a fund project instead of it being an articulation of all that God is to that writer and what He's done for him/her.If they're not careful they also can get far more caught up with spinning out a product for a fee than with God's presence in their lives.It's the opinion of this author that the thing to do when writing a worship song is to express from the heart to the best of one's abilities what one feels and apply it to song form, create something original, stick with the amazingly profound yet simple truths contained in the Volume of Sacred Law, make sure the lyrics have a biblical foundation, remember why those at a worship service sing, and not give in to the temptation of becoming a manufacturer (or consumer) of worship music.Learning all the many ways one might use music to worship the Lamb of God is a work in progress for the born-again church musician serving the Christian faith.