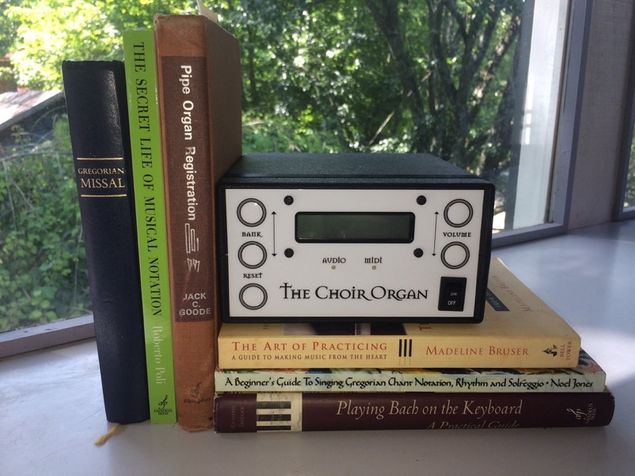 (con't from Part V)Today's modern digital organs are realistic and powerful beyond the imagination of the pioneers whose dream was to make it possible for every worship center to have and every organist to own a large enough but affordable instrument.At the same time, digital organs have increased in price, caught up in what the business world refers to, for better or worse, as "feature creep" -- adding more and more features to compete in today's fast-paced business world.The pioneers had a goal -- an affordable organ for everyone -- which is also the goal of the developers of The Choir Organ (photo).The developers of this device have stripped away everything that is not necessary for an organ to play hymns and basic organ music repertoire.This is a unit with limitations but limitations which make it affordable paired up with a relatively inexpensive keyboard with MIDI and headphones, stereo sound system, home theatre system, an existing organ speaker system, independent audio system, or even a boom box.All that's needed to play this plug-and-play device is 1) a MIDI keyboard or organ with MIDI OUT, 2) the 3 cables (MIDI, AUDIO, and POWER) and 110 volt adapter which come with the unit, and 3) an audio speaker(s).Besides having a master volume control, a MIDI keyboard expression pedal may also be connected to express and nuance the volume.This device is an affordable church organ MIDI module which brings the sound of the organ into every church and defines the core of what organs are required to do, to play a church service; it is not based upon any other sampled organ designs and not built to compete with the latest physical remodeling technology or to replace existing instruments; it is rather to get the sound of the organ into churches again and help them to visualize and acquire a church organ that will inspire and create new organists.The device is equipped with 31 banks of stored preset registrations including those with organ ensembles which increase in level and brilliance; these banks are used one at a time and can be quickly changed.Certain stored registrations feature an invention which makes it possible to play pedal stops within a registration -- "Graduated Pedal" stops decrease in scale as they rise in pitch, eliminating the sudden drop-off of pedal stops played using a Bass Coupler.This is just one of the innovations built into this device, created by working not to recreate a pipe organ but to provide affordable and useful organ stops and registrations for churches and organists unable to afford any kind of organ.