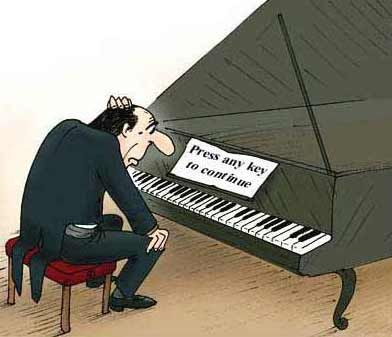 (con't from Part III)The ability to handle new music quickly and easily is an important part of an organist's training, and many times this new music will be in the form of a song for voice with piano accompaniment.Printed accompaniments for soloists and choirs are generally for piano, not organ.Let's say that one day you're in a music store seated at a large electronic organ when someone grabs some sheet music at random from the display, places it on the rack, and says, "Play this."Let's further presume that this piece of sheet music happens to be an arrangement of a popular song for voice and piano that you've never seen before (which is usually the case 100 per cent of the time).This may seem like a sight reading test, and that's certainly part of it, but there's something else from the skill department involved -- something very important that's closely related.An organist needs not only to be able to sight read 4-part hymns from the hymn book and simple organ music on three staves but also to rearrange sheet music for voice and piano accompaniment on the spot while sight reading it so that it comes across on the organ.Of all the skills demanded of an organist, this is right up at the top because it's so frequently called upon.Despite the impression it leaves with the uninitiated who may watch videos of world famous organists pounding the organ's keys in a rapid-fire frenzy of inspiration while improvising, anyone who holds down an organ key for the first time with a stop drawn learns that it's not necessary to strike the organ keys with increasing force to increase the volume of the sound.The organ can sustain a tone indefinitely but cannot attack one; the piano is opposite, able to attack a tone in more than one way but unable to sustain one.This difference is reflected in sheet music arrangements.The main difference to be noticed between organ sheet music and piano sheet music has to do with the piano's sustaining (damper) pedal, the device employed to prolong the vibration time of its strings [See blog, What About The Piano].Piano music features octaves, octave chords, arpeggios spanning many octaves, long jumps from bass to treble, etc., usually with the sustaining pedal depressed; this creates an effect that's impossible to perform note-for-note at an organ.What this means is, all such passages of piano music having octaves, long jumps, arpeggios, and sustained chords, octave chords, and repeated chords, when performed at the organ, all need to be modified from the printed page so they sound "organistic."It all boils down to simplifying the piano part while at the same time preserving as much as possible the harmonic and melodic elements baked into the piano part.This is a study in itself, but some general tips can be offered to help the organist handle new music when confronted with a voice/piano arrangement.1. Long Jumps -- the bass note is shifted from the left hand pinky finger to the left foot. This frees the bottom chord to be played by the left hand and sustained. The top chord is played with the right hand.2. Octaves -- only one of the notes is played. When playing the top note a full 16' and 8' tone is used. A suboctave coupler might also be drawn to get the lower note of the octave to sound even though it's not played.3. Long Arpeggios -- these notes are kept inside one octave so that all the notes lie under the outstretched fingers of a single hand.4. Sustained Chords -- notes written too low on the bass staff, i.e. notes written below the 16' low C two lines below the staff, are moved up an octave. Extreme upper range chords are played in middle range.5. Big 4-note Octave Chords in the Right Hand -- these can be played by dropping the bottom note to produce a thinner 3-note chord, by dropping the bottom note and one other note of the chord as a duet, or by playing only the top melody note.6. Repeated Chords -- reiterated chords can be played by sustaining the top note of the chord and repeating the remaining notes. By moving the left hand bass note to the feet, the harmony in the reiterated right hand chords also can be sustained by holding the same chord in the left hand.When converting this to an organ solo, close attention needs to be paid to the voice line printed above the piano part so that these melody notes can be included in the rearrangement and made clearly evident to the listener; generally this means playing it by the right hand, either as single notes or as the highest notes of chords.When performing an organ transcription of any well-known piano work (such as Claire de lune from Suite bergamasque, by Claude Debussy) there is less liberty to exercise these same general principles, but they still apply.(con't in Part V)