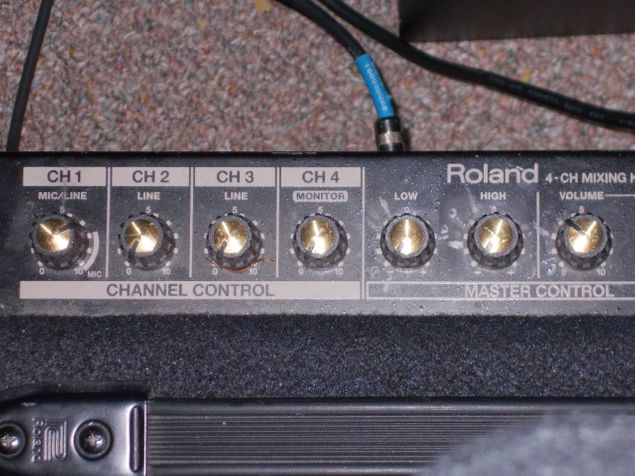 (con't from Part IV)A word of caution about using powered keyboard amps ...The word "amp" in general usage is short for "amplifier" and can refer either to 1) an electronic amplifier or 2) some type of gear containing both an electronic amplifier and one or more loudspeakers within the same enclosure.A virtual pipe organ, as we all know, must speak through loudspeakers driven by at least one amp which functions to boost the incoming audio signal it receives; the amp and loudspeaker(s), as stated, can remain separate units or be housed together as found in a conventional powered keyboard amp (photo).The latter, as its name implies, is specially made for keyboard use and typically controlled by a series of adjustable knobs.For best results the function and operation of these knobs is critical and needs to be thoroughly understood.It's important to understand the difference between Gain and Volume.Gain is the parameter for the amount that the amp circuit is going to increase the amplitude of the input signal; usually when adjusting the Gain some sort of pre-amp and how it's going to handle the incoming signal is being manipulated.In simple terms, Gain is the control for what comes "in" to a piece of gear.Volume level, or loudness, on the other hand, affects the output headed from an input channel to whatever bus is assigned to it and can be thought of as the power amp level.In simple terms, Volume is what comes "out" of a piece of gear.A simple way to think of these from a mixing perspective is that the Gain is going to be the sensitivity, and this is usually a "set and forget" setting.One reason to not ride the Gain control is that as the Gain increases the noise floor of a signal, i.e. the audible noise of components in the signal chain, increases with it; usually this noise floor is below the threshold of hearing, but, as the Gain is brought up, this noise floor comes with it.When relating this to amp settings, the Gain or drive is going to control how hard the incoming signal is hitting the preamp, and this is where the term "overdrive" comes from as the preamp stage is being literally overdriven.The Line level input Gain knob first should be adjusted for tonal purposes and then the Volume knob should be used to increase the level of the power amp to bring the signal to the loudness desired.Doing this the other way around can bring unwanted noise into the signal.In addition, with certain types of gear equipped with multiple Line level input jacks where the first jack is built to receive either Line level input OR Mic input (photo), bypassing that jack may result in a Gain structure that's suboptimal; this is because such a jack would be supplied with a special Mic preamp to help boost the Mic input signal, as the latter is much weaker than any Line level input signal would be. This leads to certain "Points" of operation:POINT NUMBER ONE -- When a powered keyboard amp is supplied with multiple Line level input jacks with the first one capable of receiving either Line level input OR Mic input, THAT jack would be best to use with a single Line level input source.POINT NUMBER TWO -- In such a case, the Channel One Line level input Gain knob (far left in photo) should ALWAYS be kept at a higher level than the amp's Volume knob (far right in photo) and preferably somewhere near the median position; put another way, the Volume knob should NEVER be set at a higher value than any Line level input Gain knob in use -- or noise will result.POINT NUMBER THREE -- When some experimentation has been done using the ear to adjust Line level input Gain and Volume, the positions of these knobs (along with Treble and Bass knobs, when present) should be marked in some way, such as with a pencil (photo).That way, in the event these settings (which may have come at the price of considerable time and effort) manage to get disturbed during transport -- OR if the amp is to be connected at times to a different keyboard instrument -- the same settings can be retrieved easily enough at a future time.Labeling the male audio cable plugs connected to the console's Line level channel output jacks, showing exactly where they plug into the back of the console, is also a very good idea; a battery powered adhesive label maker can be used to create these labels which then can be wrapped around the plugs very easily.(con't in Part VI)