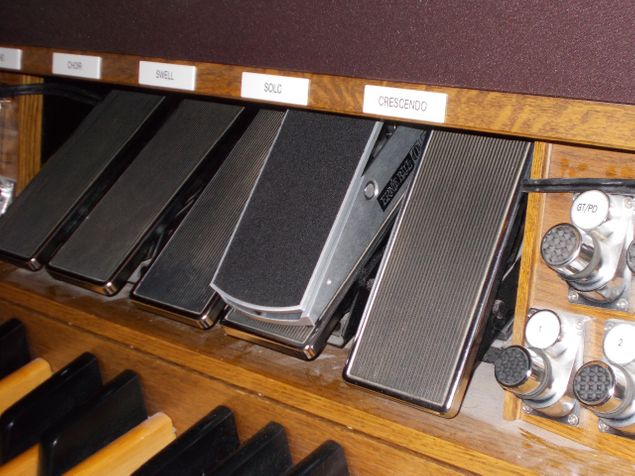 (con't from Part III)Theatre/cinema organists know that the melody of a song dictates the volume pattern, thus having the instrument fully expressive becomes an absolute necessity in theatre/cinema organs whose entire tonal forces, save perhaps for its longest Diaphone pipes, are placed in enclosed chambers; in addition, a means for expressing the entire instrument through a single shoe also becomes a necessity.Duet [See blog, Virtual Pipe Organ (VPO, Part III] therefore had been engineered to express through a single master volume pedal, and the fact that it was on its own pedal endowed the host console with new powers of compound flexibility and expression.Duet was only available upon special order from MIDI Concepts LLC, a company which has since been liquidated, but the pedal selected for its expression was the owner's choice.This unit generated a R/L stereo output signal, thus, to express it, a stereo volume pedal was needed; while the player remained free to choose what they want to use, Duet's designers recommended using an Ernie Ball 6167 25K Ohm Stereo Volume Pedal (photo) to express this unit's voices.This is a high-quality pedal which happens to be the same size as a conventional Swell shoe (4 X 10 inches), is of rugged steel construction, has a smooth action matching the resistance of a built-in console shoe, and functions as a potentiometer between Duet's sound generator box/Boosteroo and the power amplifier driving the organ's external speaker system.NOTE: In some applications a small, portable T613-BNC Boosteroo made by Upbeat Audio was sometimes necessary to connect Duet's sound generator box to this pedal to double Duet's output signal without distorting [See blog, Virtual Pipe Organ (VPO), Part III]; the Boosteroo comes with three 1/4-inch output phone jacks, one of which is used to connect with Duet's pedal, and runs on two AA batteries which provide up to 120 hours of playable life without replacement.This Ernie Ball pedal is equipped with twin 1/4-inch stereo input and output phone jacks which receive and send, respectively, the audio stream; the only question it poses is deciding where and how to place it.Most host consoles provide enough space for this pedal to sit atop one of the expression shoes and still leave enough vertical room when the organist's shoes are removed for the right foot to work it through its whole range of movement.In the privacy of one's own home, for practice purposes, one solution therefore was to place it "piggy-back" on top of a fully depressed Solo shoe (photo); the pedal's weight and non-skid rubber feet kept it stable in this position, and, provided the right foot was happy wearing just a sock for practice, it became a non-issue, and no construction was necessary.While this kept the Solo shoe from moving it did not completely neuter expression of the Solo stops in instruments which had a Master Swell coupler; in such a case they still could be expressed along with the entire organ using the adjacent Swell shoe.Obviously, when it's important to wear shoes during practice, this does not work, the alternative being to alter the console from factory design by removing one of its expression shoes to make room for Duet's pedal.In the event Duet was ever removed from the host console for connection to some other instrument, the process was fairly simple; all that was really required was for the Midi assignments of the sound generator's memory stick to be reconfigured for the second instrument; this was done by sending the memory stick to Midi Concepts LLC along with the second instrument's Midi implementation sheet (if there is one) and remitting the required payment to cover costs; the disassembly and reconnection of Duet's sound generator box, pedal, and control panel posed no real challenges.Some audio cables were needed to connect Duet's stereo volume pedal; when used with a host console as described above the length of these audio cables to and from the pedal needed to be about 15 feet, and their pathway was as follows:The single speaker output jack on Duet's sound generator box accepted a male 3.5mm stereo plug, and the other end of this cable required a splitter ending in a pair of 1/4-inch male phone plugs for connection to the pedal's stereo input jacks; this cable, when the sound generator box sat atop the right side of the console and the power amp/mixer sat atop the left, would snake down and around the right side of the console and drape along the top row of toe pistons before squeezing inside the console to reach the pedal's input jacks.The pedal's output jacks will then carry the stereo audio stream over an audio cable having two 1/4-inch male phone plugs on the pedal end (two separate single-end male plugs would also do); these would then snake outside the console to emerge on the left side and drape above the top row of toe pistons on their way up the left side of the console to the stereo input jacks of the power amp/mixer.This manner of placement worked to keep these cables out of the way of the organist's feet and hidden as much as possible.When set up in this fashion the elevation difference between Duet's pedal and the organ's remaining shoes was actually not that critical; as long as the player could work Duet's pedal easily and efficiently and adapted quickly to it "by feel," it was a small matter -- a small price to pay to have Duet express with the host instrument in a readily usable way.Under a skilled hand, Duet's sound really transported the listener to the fabulous Fox Theatre at curtain time.(con't in Part V)