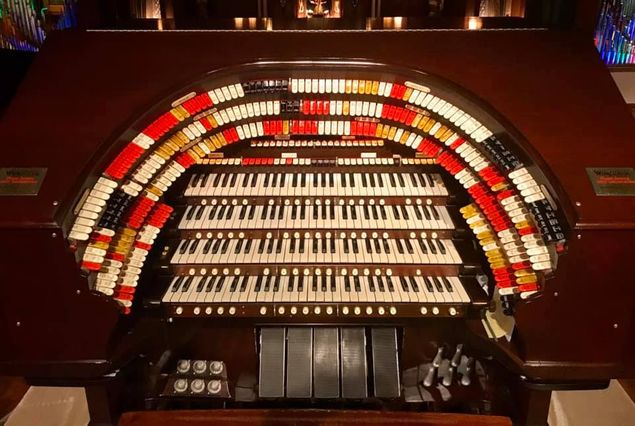 At the very beginning of the motion picture industry (1895) the first pipe organs supplied to theatres and cinemas looked, sounded, and operated very much like church organs -- but, one thing about it, due to the application of electricity to organ building, it became possible in that day to position consoles in or near the orchestra pit in front of stage and screen, far removed from the pipe chambers.Those who played these early theatre/cinema organs soon discovered that during the course of a "silent" motion picture a great many hand registration changes "on the fly" with split second timing were demanded.It was found that, the more the time involved in working the machine could be minimized, the better the organ's sounds and effects could be coordinated with the images on the screen, moment to moment.It was also found that during the course of a silent film, from one series of camera frames to another, to captivate and hold an audience's attention the organ's sound, the model for which was the modern orchestra, not only had to be dramatic and on cue but constantly shifting, scene to scene; thus, rapid and frequent registration changes ruled the day. This provided the impetus for an avalanche of innovations in organ building which were to culminate in the appearance in the early 20th century of what became known as the unit theatre/cinema pipe organ and, several decades later, by its many forms of electronic substitutes.The sound colors, couplers, and tremulant controls of these highly specialized instruments were invariably operated not by conventional drawknobs or rocker tablets but by means of color-coded engraved stoptabs arranged in curved bolsters (rows) which encircled the manual keyboards from one side to the other; these stoptabs were simple spring-operated switches which opened and closed electrical circuits and were made subject to an electrically-operated moving combination action.By aligning these stoptabs in rows very close to each other they could be placed within easy reach of the organist's hands; depressing a stoptab represented the "on" position, and returning it to position retired it -- and, due to their relatively small size, there was room for plenty of them; even in the smallest 2-manual unit instruments of 4-6 ranks, a great many of which were built, it was not uncommon for these stoptabs to number well over a hundred.Implementation of this practical and aesthetically-pleasing curved arrangement, the model for which was the stepped, curved terraces of drawknobs common to 19th century French organs, is generally given to British-American organ builder Robert Hope-Jones (1859-1914).This curved arrangement became known as a "horseshoe sweep."While it would be incorrect to assert that this system of stop control makes conventional drawknobs and rocker tablets "obsolete" it does offer the advantage of being able to make hand registration changes in large clumps very quickly with one motion of the hand; additionally, with a single flip motion of the index and middle finger, a stop can be retired at the same time that the one immediately next to it on the bolster is drawn.All of this translates into speed.(Photo above shows the horseshoe sweep of the hybrid Wurlitzer unit theatre organ installed in the Music Room of the Nethercutt Museum in Sylmar, California)