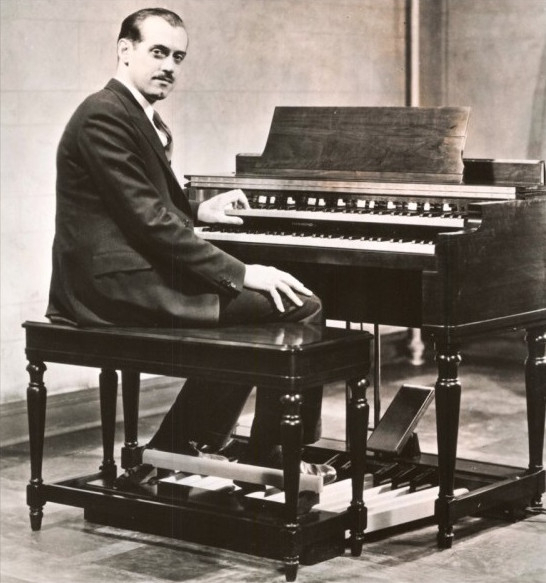 (con't from Part II)Laurens Hammond (1895-1973), who is generally credited with the invention in 1934 of the Hammond electric organ and is shown in this photo seated at the ever popular Hammond Model B-3, was a mechanical engineer and one of the most famous inventors in history.The Hammond organ, an instrument which, in some applications, is used in Godly praise and worship, was the product of the collaboration of Laurens Hammond and John Hanert and was first manufactured in 1935.Although sometimes included in the category of electronic organs, the majority of Hammond organs today are, strictly speaking, electric or electro-mechanical rather than electronic organs because the sound is produced by moving parts rather than electronic oscillators. Until 1975 Hammond organs generated sound by creating an electric current from rotating a metal tonewheel near an electromagnetic pickup and then strengthening the signal with an amplifier to drive a speaker cabinet.The basic component sound came from a tonewheel; each one rotated in front of an electromagnetic pickup, and the variation in the magnetic field incuded a small alternating current at a particular frequency which represented a signal similar to a sine wave; when a key was depressed on the organ it completed a circuit of 9 electrical switches which were linked to the drawbars; the position of the drawbars, combined with the switches selected by the key depressed, determined which tonewheels were allowed to sound.Every tonewheel was connected to a synchronous motor via a system of gears which ensured that each note remained at a constant relative pitch to every other; the combined signal from the depressed keys and pedals was fed through to the vibrato system which was driven by a metal scanner; as the scanner rotated around a set of pickups it changed the pitch of the overall sound slightly; from here the sound was sent to the main amplifier and on to the audio speakers.This kind of instrument makes technical compromises in the notes it generates; rather than produce harmonics that are exact multiples of the fundamental as in equal temperament it uses the nearest available frequencies generated by the tonewheels, with the only guaranteed frequency for Hammond's tuning being concert A at 440 Hz.It's of interest that crosstalk or "leakage" occurs when the instrument's magnetic pickups receive the signal from rotating metal tonewheels other than those selected by the organist; the Company considered crosstalk a defect that required correcting, and in 1963 introduced a new level of resistor-capacitor filtering to greatly reduce this crosstalk; however the sound of tonewheel crosstalk is now considered part of the signature sound of the Hammond organ, to the extent that modern digital clones explicitly emulate it.Some Hammonds have an audible pop or click when a key is depressed; originally this was considered a design defect, and Hammond worked to eliminate or at least reduce it with equalization filters; however many performers so liked the percussive effect and prominent attack of the key click that they objected when it was eliminated, thus it has been accepted as part of the classic Hammond sound. Today the popular Hammond B-3 organ of the traveling band is most commonly used with a supplemental Leslie add-on speaker cabinet [See blog, The Leslie Speaker], but the original Hammond B-3 was never designed to be transported regularly; the B-3 model with bench and pedalboard weighs heavy at 425 pounds, and this weight combined with that of a Leslie cabinet makes it cumbersome and difficult to move between venues.This created a demand for a more portable and reliable way of generating the same sound; the more lightweight electronic and digital keyboards which imitate the tonewheel sound of the Hammond are called "clonewheel organs."Around 2 million Hammond organs have been manufactured; they were originally marketed to churches as a lower-cost alternative to a piano or wind-driven pipe organ but quickly became popular with professional jazz musicians; jazz club owners also found that organ trios centered around it were more cost-effective than hiring a big band.The Model B-3 equipped with its additional percussive effect has since inspired a whole generation of organ players, and since the 1960's its use has become widespread in rhythm and blues, rock, progressive rock, and funk bands.Around the time of the death of Laurens Hammond in 1973 the Company abandoned tonewheels and switched to integrated circuits; these organs were not as popular however, the Company struggled to survive, and it went out of business finally in 1985; servicing and spares continued to be available after this however under the name Organ Service Company.In 1986 the Hammond brand and rights were acquired temporarily by Hammond Organ Australia, but in 1989 the name was purchased by the Suzuki Musical Instrument Corporation, a Japanese firm which rebranded the Company Hammond-Suzuki; its founder retained many former Hammond Organ Company staff for research and development which ensured that production would partially remain in the United States; this Company continued to manufacture digital reproductions of the most popular Hammond tonewheel organs which culminated in the production of the "New B-3" in 2002, a recreation of the original B-3 organ using digital technology.Hammond-Suzuki continues to manufacture a variety of organs for both professional players and churches.