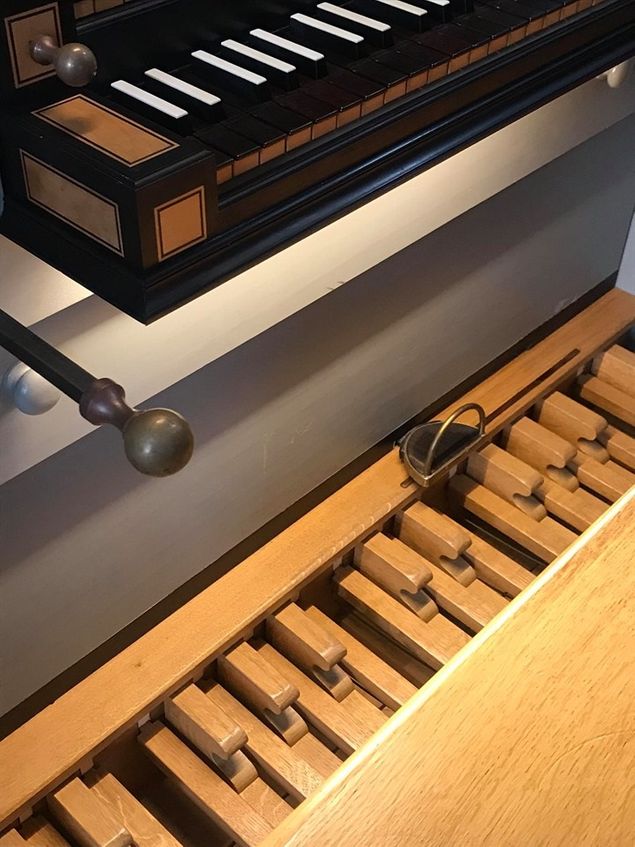 One of the earliest German organs to be given an expression pedal was the 1739 Wiegleb organ of the former court and collegiate Church of St. Gumbertus in Ansbach, Bavaria (photo).Initially constructed by organ builder Johann Christoph Wiegleb in 1736-1739 this historic instrument of 47 stops and 3 manuals has been faithfully reconstructed and restored to original standards; at the time of its construction it constituted a bridge between North and South German methods of building during an era when enclosed pipes were basically unknown outside of England and Spain.Germany which led the world in organ building prior to the 19th century was in fact very slow to apply the concept of the swell to the construction of organs and typically confined this novelty at first to only one division of very limited size or possibly to just a single stop.In this organ a stop labeled "Echo" is supplied to the third manual division (Mittlerewerk); this voice is a compound stop comprised of 5 ranks sounding at 8', 4', 2-2/3', 2', and 1-3/5' pitches whose purpose is to supply color and distinctness to a cantabile solo line carried in the right hand.Such a stop when it appears in modern organs typically is labeled "Cornet" (pronounced "cor-nay").The original Wiegleb design called for this colorful voice to be enclosed, thus an expression pedal operating as a slider was inserted in the toeboard of the keydesk for this purpose.The device is operated by placing the toe of the right shoe inside the pedal's metal arched loop and using the right leg to slide it left or right; movement to the right opens the shutters, and movement to the left closes them (photo shows the shutters completely closed).Closing the shutters from an open position thus provides a distant or "Echo" effect for this stop, thus giving rise to its name; conversely, opening the shutters brings the sound closer and eliminates dampening of the higher harmonics brought about by enclosing the pipes, thus brightening the timbre.This unique ability to adjust the strength and assertiveness of this voice by enclosing it behind swell shades gives it powers of flexibility and expression which multiply its utility at least tenfold.While the insertion of such a mechanical accessory operating on a single stop may seem crude and primitive by today's standards, its insertion in a German organ from this period was considered quite an innovation.