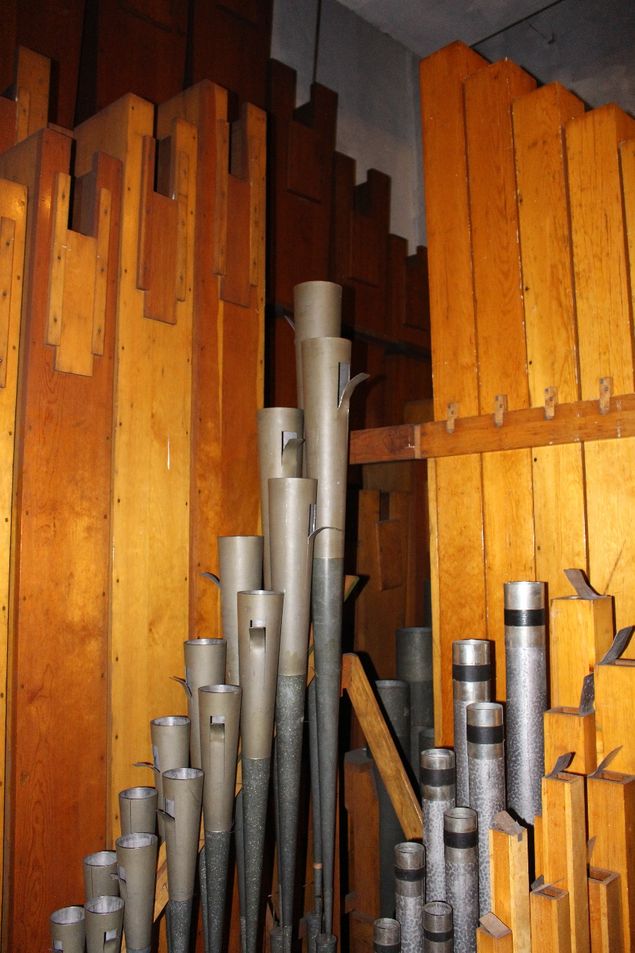 (con't from Part VII)[Photo: courtesy of Kimball organ at Saint Louis Scottish Rite Cathedral in Saint Louis, Missouri; taken 15 feet in the air in Main chamber facing northwest corner, pipes of Harmonic Trumpet (center, metal), English Diapason (right, metal), Concert Flute (Pedal Bourdon, wood, right), Principal Diapason (wood, left), Pedal Contra Bombarde & Clarion (wood & metal, background)] Organists often complain about tuning; the pipe organ is a wind instrument, and it's affected by temperature and humidity (See blog, Temperaments & Tuning, Part VII).When it's warm the organ will go sharp; when it's cold it will go flat; normally this is not particularly noticeable, except that the reeds are NOT much affected by temperature; their pitch is determined by the length of the brass tongue that vibrates.If the whole organ was tuned in winter at 68 degrees Fahrenheit, in the summer heat the flues will go sharp and leave the reeds behind, sounding flat to everything else.In some voicing styles, notably by Schantz, reed pipe pitch is determined as it is with flue pipes, by the length of the pipe; in others, such as used by Fisk, it's determined entirely by the length of the tongue.It's important to understand this when tuning reeds.Schantz reeds, for example, are almost all tuned with a scroll at the top of each resonator (as in photo, which shows a Kimball Harmonic Trumpet); Fisk reeds, on the other hand, have no scrolls -- most are "dead length" and must be tuned at the wire.The basic tuning concept is simple, but in practice it's rather complex; every pipe has a means of changing its length -- and this feature is built into it by the organ builder.Flue pipe pitch is determined by the number of air molecules inside the pipe, measured from the mouth to the tuning device; this is why pitch goes up when it's hot; the more active air molecules contain more energy, and they bounce around more than when they are cold, reducing the air density and therefore the number of molecules excited into vibration by the pipe.Metal pipe length can be changed by fine tuning the position of a movable tuning slide constructed at the top of the pipe, by slotting (photo) or scrolling the end of the pipe, by bending large ears on each side of the pipe mouth, or by using a tuning cone to physically bend the top of the pipe in or out; the pitch of wooden pipes may be adjusted by means of a sliding piece of metal or wood (photo) near the top of the pipe or a movable stopper or cap inside the top of the pipe.If we can tune the thermostat, we can tune the organ without changing the pipes; it will be in tune with itself whenever the temperature is the same as the last tuning temperature (unless dirt of some foreign object is present).In extremes of outside temperature the organ reeds will NOT be in tune; in the heat of summer, we simply avoid the reeds; when the temperature drops to normal, they will again be in tune.If there is a budget for seasonal tuning we will want the reeds (at least) tuned for winter when the furnace is running, and again for summer after the furnace is off.We should try to avoid spot tuning, if we can; this is when someone tunes a couple of octaves of a reed we plan to use; now the rank is out of tune with itself, and no amount of thermostat tuning will bring it back.If we proceed to do any tuning ourselves, we should tune the entire rank at one time; a complete tuning from top to bottom (every single pipe in the organ) usually is needed only every 20+ years in an organ's early life; most tunings deal with reeds, wood pipes, high-pitched flutes, and perhaps a few other stops that are known to be unstable.To budget for tuning, we compute a "worst case," which is tuning EVERY pipe; this should be at a rate of about 3 ranks per hour, times the tuner's hourly rate, times the number of visits anticipated.In a 15 rank organ, for example, 15 ranks @ 3 ranks per hour = 5 hours.5 hours times $100 per hour = $500.$500 times 2 tunings per year = $1,000.The technician may also charge for travel time or may have a different charge if one or 2 people are involved; we may also have to budget for repairs that may be more extensive than can be covered in a standard tuning visit.When the building is heated all week in the winter without any humidification at all, moisture will be baked out of the wood causing pipes and wind chests to split; a split wind chest will hiss as air escapes, and a split wood pipe will not speak.Electronic tuners are a handy way to set or check a temperament quickly, but in general they should NOT be used for most of the tuning (unless the organ is from the early 20th century and its pipes are large scale with little harmonic development); air temperature changes constantly, so the pipes continually change their base pitch; the tuner however will not change; this means that a pipe organ entirely tuned to an electronic tuner will be out of tune -- guaranteed.