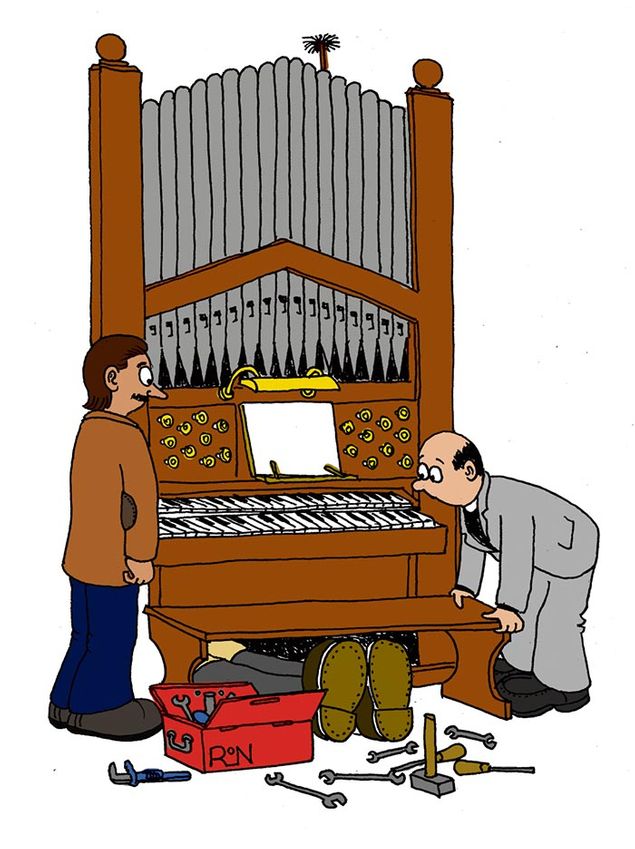 "I think I've found the Ficknozzle that connects the Doohickey that moves the Whatchamacallit!" -- the Organ Repair ManThe most frequent problems found in pipe organs are dead notes and cyphers; the latter are malfunctions which cause pipes to sound when they should not (See blog, Cyphers).In the case of dead notes (keys which fail to produce sound when a stop is drawn and a key is depressed) if we can reproduce the problem from multiple places we can pinpoint that the problem is at the pipe and not in the relay.This is called triangulation, and it's a helpful skill.If, for example, we discover a dead note on the low F6 on the Great 8' Concert Flute, and we find that the 16' Bourdon in the Pedal is also dead on tenor F18, and if it's the same rank, then we've triangulated that the malfunction is with this pipe.It's a good idea to keep a notebook where a record can be kept of issues like this for the organ technician.By far the simplest of systems for communicating to the technician which note or pipe is at fault is to count keys chromatically from left to right starting at low C; in this system middle C is #25 and there is no confusion about which key on the keyboard is intended.These written notes should be clear and specific; if we write "D is dead," or "D3 is dead," the technician will not know exactly what we mean, where to look, or which stop to check -- but if we write "Swell D27 8' Oboe Horn is dead" there will be no confusion; the problem is middle D on the Swell Oboe Horn 8'.From the builder's perspective the organ has only sharps; key #4, for example, is low D#, never low Eb (E flat); this system should be used when leaving notes for the technician; vague messages such as "Viole is out" requires the technician to do a fair amount of detective work just to locate the offending pipe, which results in poor time management, delays, and additional expense.Pipes which worked properly yesterday or last week and fail to get on speech today might have a foreign object in them, such as dead flies, dead boxelder bugs, dead Lady bugs, or even dead birds, dead bats, gum wads, rubber bands, or paper airplanes.If possible, we try to find the foreign object and remove it, being careful not to bump the tuning slide or scroll on the pipe; when the pipe cools from our body heat, it will come back into tune once again.Reed pipes are notorious for flying off proper speech from dirt; when the whole rank is affected the technician will need to clean every pipe in that rank.Cleaning all the pipes in the instrument from top to bottom keeps it functioning properly and should be budgeted at least every 30-40 years.