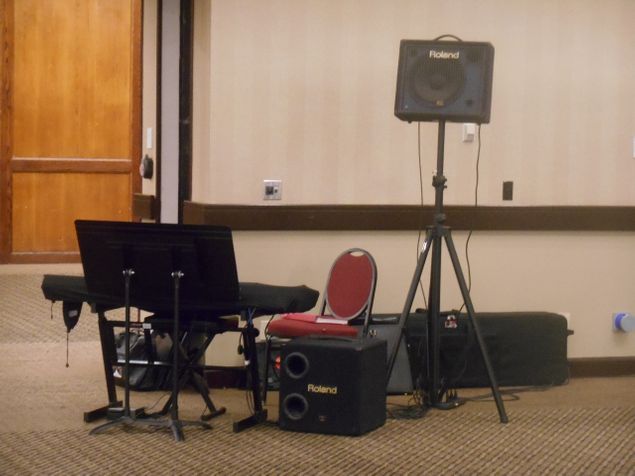 (con't from Part XII)"The music must not turn the church into an audience enjoying the music but into a congregation singing the Lord's praises in His presence." -- John CalvinBeing a fraternal organist and being a church musician have many parallels -- save for having to handle a much larger volume of new music regularly every week when working as a church musician, the functions of both are very similar.Just like the church musician though, the fraternal organist is part of a group concerned with the gift ministries, specifically the music ministry; we speak here of gifts not given to any particular congregation but appointed for every locality; the person who has such a gift has a responsibility to exercise it, and that authority comes directly from the Giver of all good gifts and graces Himself -- it does not come from any recognition by man, nor does the lack of such recognition take anything away from it. This dedicated group of people (composed of organists, pianists, keyboardists, other instrumentalists, directors, vocalists, and choir) carry out this special responsibility by bringing the art of music to bear on serving and singing praises for the purpose of uplifting hearts and minds to thoughts of God and higher things.They do not show up merely to see how many times they can perform a piece of music "perfectly," time after time; they know that that no matter how many times they practice a work, each time they perform it there will be a difference.As performing musicians they have learned to believe in spontaneity; they do strive for excellence time after time, of course, as they must -- and teamwork, and timing -- accuracy is important, all musicians know to pursue it, and it's freedom which leads them to that.And freedom is gotten by repetition, i.e. practice, and keeping good habits going.The point is, they ARE NOT there to prove anything to themselves or to anyone else -- they are not there to entertain an audience -- they ARE NOT there as enablers to bring about a transforming of worship into a musical extravaganza for the pleasurement or satisfaction of a crowd -- they ARE NOT there to make a name for themselves -- they ARE MOST CERTAINLY NOT there merely to demonstrate their musical talents and use the occasion to spotlight their own executive abilities only to end up wallowing in a cesspool of self-aggrandizement ... they are not there for ANY of that.They ARE there to touch and gently agitate the faith of listeners in a way which nothing else can, which will cause it to rise -- they ARE there to support worship, and, in that process, to pray that their listeners come to know the Word of God better through the music they make.This music ministry with which they are connected therefore, in its true and authentic form, is an intensely personal calling brought about by the Person of the Holy Spirit speaking to someone in gentle nudgings and inner awareness to use what God has put inside them for their ultimate benefit beyond this life; it has pastoral dimensions -- which is a different thing altogether than merely accepting a musician's job simply because one likes doing it; it's even independent of whether or not a salary or honorarium is involved -- it's something far more broad than that.It means the exercise of one's responsibility to use one's unique and God-given musical abilities, such as they are, to help bring people closer to the reality of God's presence in their lives, and, by sharing those gifts with somebody else, increase one's own capacity to receive more back from God.Whether they do it consciously or unconsciously, those working in the music ministry are practicing the theological principle that "givers get blessed" -- that the more something is given THROUGH them, the more the God of this universe will get it TO them and bless them with increase.While all benevolent fraternal organizations strive to improve the human condition by making the world a better place, they do not promote themselves as a substitute for the ministry of the Word, which is the function of the member's worship center and the people who work there.But when that fraternal organization happens to be composed of good men of high moral character who believe in God and work for the betterment of their fellow man, uses the Volume of Sacred Law to teach moral lessons, and relies heavily upon Judeo-Christian philosophy in what it has to offer, the members who volunteer to serve that organization as musicians are nevertheless subject to the exercise of that same responsibility, as thus defined, and to share its outreach to the world at large.(con't in Part XIV)