Getting Started With Writing, Part XXXIX 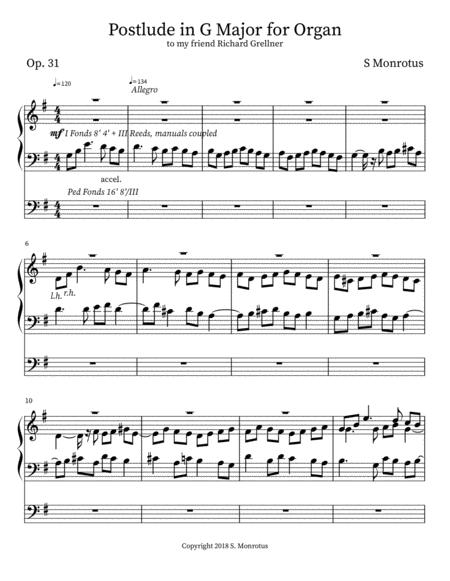 (con't from Part XXXVIII)The term bridge in music is understood to mean a musical passage linking 2 sections of a song or composition.In the score for the spacious Op. 10 Praeludium, Chorale, & Fugue in d minor we find such a bridge inserted in the central part of the work, after the Chorale finishes; it functions not just as a link but, by being built upon the Fugue's 3 countersubjects, it also relates the Chorale to the ensuing Fugue; it also closes on a half cadence with its feeling of incompleteness and something to follow, and it lends a very strong sense of unity to the entire work.While the codettas found in fugue expositions and the episodes separating entries might also, technically, fit the dictionary definition of a bridge, when we speak of a bridge, by name, in organ fugue writing we generally understand it to mean a short passage, often constructed upon a sequence, linking the exposition with the first subsequent entry -- one that continues in all voices until the beginning of the 1st episode at which time the pedal line comes to a stop.The Op. 22 Postlude in d minor is an example of a piece which contains this type of construction.This is a stand alone 4 voice fugue written in triple counterpoint with 2 countersubjects maintained throughout; the final entry in the exposition is connected with the ensuing entry in the relative key by means of a bridge passage which continues in 4 voice polyphony until the next entry [See blog, Getting Started With Writing, Part XXVII].In this example the bridge is 6 bars long and built upon a sequence which brings about a return to the home key before modulating to the relative key for the ensuing entry.This type of construction may also be successfully inserted into pieces written in quadruple counterpoint, as seen in the score for the Op. 31 Postlude in G Major (photo) -- another 4 voice stand alone fugue, only with 3 countersubjects maintained throughout.This work has a long subject which begins on scale degree 1, a tail which points strongly to the dominant key, and is supplied with a tonal answer. The exposition is remarkable for having a redundant (5th) entry in the relative key (e minor) which is approached by means of an ascending sequence with pedal which functions as a modulating link.As the remaining entries in this G Major Postlude proceed through all related keys in similar fashion to that described in previous postings, plus one unrelated key (A Major), the subject and countersubjects enter in the bass at least once.Episodes separating the various entries are in 2 voices (alto and tenor) and, save for one instance which employs another ascending sequence in the same rhythm as the 1st bar of the subject, are constructed using inversions of the subject and countersubjects.In this work a stretto section in 3 voice trio texture links the penultimate entry with the final entry and undergoes a crescendo with the addition of stops and couplers.A short coda employing the melodic curves of the subject and countersubjects and the addition of a 5th and then a 6th voice rounds out the work which also ends with great finality using the full power of the instrument.(con't in Part XL)