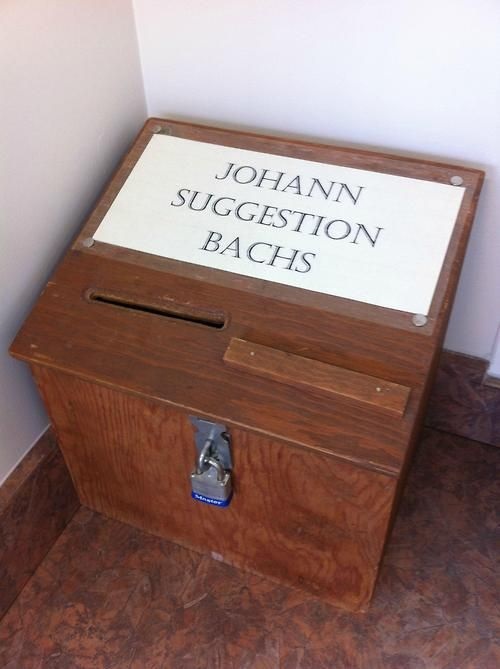 "It will be fine, even if you sit on the keyboard."-- John "Quasi" WeissrockThere are many cautionaries in music, and the best suggestion we can give an organist is up for grabs, but, here's one that has to rank right up at the top:Keep your sense of humor.Let's say you're the principal organist presiding over a large instrument -- and a big semiannual event is approaching at which you're expected to accompany 20 choral numbers not counting the performance of certain repertoire, hymn arrangements, and incidental music -- all before a large audience over the span of 2 days and one intervening late night.And let's say you've prepared for it by practicing 3 hours a day on a hard organ bench for the last 2 weeks, never missing a day -- so much in fact that your bottom is sore.And let's say you live a distance from the venue, have to drive back and forth, and you've had only 3 hours sleep between both days.Most people won't have a clue about what you have to do, how you've spent yourself, or what you've sacrificed to get yourself prepared for this and won't care -- and let's say you know from experience that compliments from the sidelines are generally not plentiful.You can always invite the sideliner telling you that your choir soloist "can't sing" to put on a choir robe himself and join all the rest of you in the balcony where you and your choir are living a dream.When you happen to walk up to a sideliner with his back to you and overhear him telling someone else that you're "not much of an organist" you can always tap him on the shoulder, tell him he only thinks he knows you, and invite him to sub for you at the next big event.The organist is the only musician on the face of this earth who plays too fast and too slow, too loud and too soft, too smooth and too choppy, too familiar and too strange, too simple and too confusing, ALL AT THE SAME TIME.Even J.S. Bach, his art, and even his education, were not immune in his day to the slings and arrows of malicious, rude, and undeserved criticism from charlatans and armchair experts.It's tempting to get annoyed, if not angry, at the stupidity we discover around us -- but it's the organist's job to minister to everyone, not just those who know something about it and know better than to criticize.An expert is someone who has stopped thinking.The true pro in the audience will be a lifter who offers you and your singers an encouraging pat on the back for the job you did, someone for whom the very thought of throwing rocks at fellow musicians would be abhorrent.Being a pro is an attitude.Learn to laugh at things like this, know that you're in the best of company, and move on.It's important to enjoy.