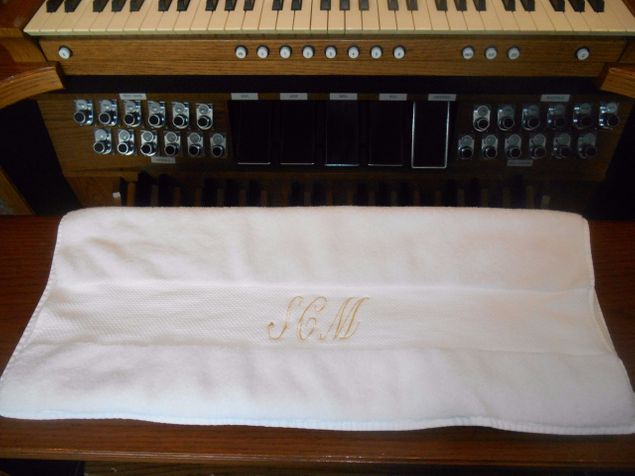 We can feel blessed if our overall body height and the length of our legs works with the standard organ bench as it comes from the factory; that standard height is defined by a plumb line dropped from the center of the top of the bench to the middle E key on the pedalboard when the distance is exactly 20.5 inches [See blog, American Guild Of Organists, Part II].If the organist happens to a "daddy-long-legs" 6 feet tall or more the standard bench like this can be too low; it may be too high for someone little more than 5 feet tall.When the builder has supplied a hand crank mechanism on the side of the bench, it's a relatively simple matter to crank the bench top to the ideal position for each player.To accomplish this without a crank mechanism when the standard bench is too high it will need to be cut down at the bottom and refinished by a woodworking technician.When the bench is too low the most obvious fix is to raise the bench on each end by setting it on 2 wooden blocks or shims of the right thickness; this will be decided by trial and error until the feet of the organist are resting over the pedal keys where they should.Wooden blocks specially made for this purpose are available from several different companies such as Allen, Johannus, or Rodgers, or they can be custom-built by any good woodworking technician.Another, albeit more expensive, fix would be to retrofit the bench or completely rebuild it with a hand crank on its side which raises or lowers the top of the bench plus or minus 2 inches from the standard [See blog, What About Bench Position].Until such time as the bench top can be raised or lowered, a temporary fix using a cotton or terrycloth towel might be considered (photo); a towel, being thinner, can be expected to interfere less with the movement of the legs and the turning of the body than when a commercial piano or orthopedic seat cushion is used.Some experimentation obviously is required; there are organists who like to play through the entire hymn book in one day and may spend up to 12 hours doing it; for that kind of marathon practice session a cushioned bench becomes a necessity -- and it probably will have to be rotated around several times.After a day like this at the console, organists can experience a backache; normally they don't even go near an organ bench the following day.After only one hour seated on an unyielding, flat wooden bench our bottom will start feeling sore, and more so the heavier we are.A towel or cushion, while it pads and shields the bottom against pressure, it will elevate the feet off the pedals and restrict the space between the bottom manual and the thighs; this shifts the body away from the exact spot where the toes and heels need to fall is very precise if we expect our pedal technique to work for us.To counterbalance this change the bench will need to be lowered some way by the same amount when sitting regularly on a cushion to play.There's another not-so-obvious thing to consider when a bench cushion is used; it prevents the organist from sliding the body weight across the top in getting on and off the bench.This body weight has to have some other place to go, and, while this doesn't sound like much of an issue, it forces the performer to stand on the white pedal keys to support the weight of the body to assume or leave the playing position.The pedal keys and springs, while they're relatively sturdy, are made to play music; passageboards are made to support the weight of the body.Many organists have developed the habit of standing on the pedalboard when getting on and off the bench, and it seems to be widely indulged in; some pedalboards in fact seem to be made for it without risk of breakage; not all of them are.This is important to bear in mind when serving as a sub or guest organist at an instrument to which we have no regular access; we don't carry insurance for instrument damage that happens when we're in the chambers, and we don't carry it for console damage, either.Organists, like all musicians, are creatures of habit and will draw their own conclusions about how and for what purposes their own or any other pedalboard will be used.