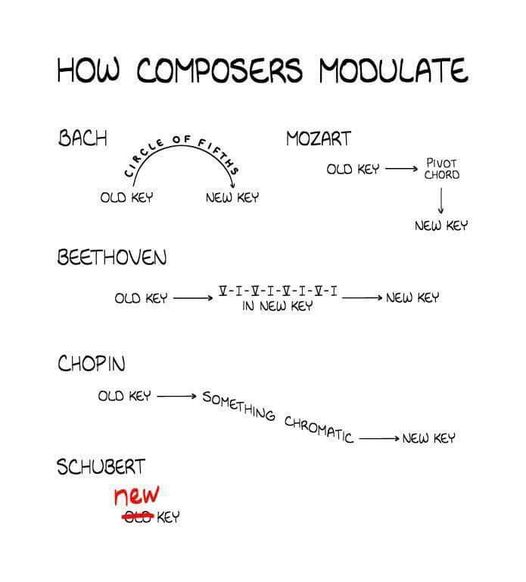 (con't from Part V)Because improvisation and transposition are so closely related a very helpful resource for learning how to think as you modulate from one key to another as you're improvising is Reger's little book called "Modulation" which is an unabridged republication of the 1904 work published as "On the Theory of Modulation" which is available today at reasonable cost as a Dover reprint.In this little book there are newly engraved musical examples of 2-4 bars length of how to move smoothly from a certain tonic key to any other key by means of a simple harmonic progression, which can be memorized and mentally transposed from any other starting tonic as desired as the organist improvises.This is a basic and very important skill with which all improvisors at the organ need to be proficient and comfortable and ready to execute to serve their musical ideas at a moment's notice.All of the great keyboard improvisors from history were expert at moving smoothly from one key to any other like this without any music in front of them.As the story goes, when Claude Debussy was a student of Cesar Franck's keyboard improvisation class at the Paris Conservatoire, Franck would become infuriated with him for not changing keys enough or in the manner to which Franck was teaching.Franck was a disciple of Richard Wagner whose way of modulating was by semitones where the new chord had a functional relationship to the chord being left, and this was how Franck taught it.Instead, Debussy preferred to stay in the same key and, when he did move to a different key, the chord to which he moved usually had no functional relationship at all to the chord he was leaving; in particular, he avoided the leading tone relationship and more often used the whole tone scale and parallel harmony to get himself there.The old Wagnerian Franck would cry "Modulate, modulate!", pounding on the lid of the pianoforte, when Debussy stayed in one key too long or used the whole tone scale in a succession of chords."Why should I modulate?" was Debussy's reply ... "I'm perfectly happy right where I am."Outside of class, Debussy would call Franck a "modulating machine," partly in a satirical sense but mostly out of respect for Franck's uncanny abilities to move frequently from key to key using tonal chord connections during his improvisations.The core information about modulation using tonal harmonic progressions with functional relationships is well encapsulated and codified in Reger's little book.(con't in Part VII)