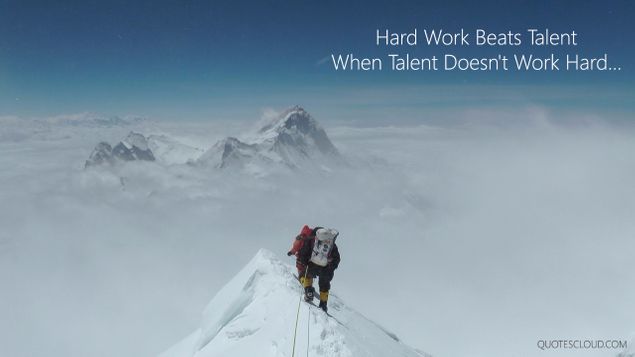 "I worked hard. Anyone who works as hard as I did can achieve the same results."-- Johann Sebastian BachAside from the fact that Bach was an immensely talented, naturally gifted, comprehensive musical genius, his sheer mastery of the techniques of composition was not something he was born with; it was the result of many years of disciplined hard work.In the absence of hard work, Bach's natural musical gifts never would have come to fruition.And so it is, with all of us.The next time you listen to an organist play for your worship center or fraternal organization, and you liked what you heard, go up to them afterwards and thank them for the hard work involved.It's very tempting to think they're so talented that all they need to do is show up without any preparation whatsoever, sit down on the bench, and somehow a stream of inspired sound will miraculously emerge from the instrument the moment they lay their hands upon it."After all, they're only making music, aren't they? ... they're not involved with any of the real work, are they? ..."This line of thinking is very common and wide off the mark.What a musician makes look easy isn't so easy and comes at a price in the form of some personal sacrifices ... an avalanche of time, money, effort, cruel uncertainties, disappointments, blood, sweat, tears, and some back-breaking work.Consider that some musicians may have to load heavy musical equipment into their vehicle the day before, transport it, unpack it, assemble it, disassemble it, and pack it out the day of with little or no help, and sometimes drive hundreds upon hundreds of miles with it back and forth across the continental divide to the playing venue just to keep the airlines from losing or damaging their equipment, while everyone else can simply fly there.Sadly, and it's just an unintentional oversight, the musician is typically overlooked during introductions, so frequently in fact that many of them don't ever expect to be introduced; this is why, if and when they ARE introduced, they look so surprised.What's worse, and more importantly, it sometimes happens that the musician isn't listed among the cast members when emails or letters are distributed announcing the conferral of degrees; they aren't even asked to participate in the conferral when they supplied all the musical accompaniment, and performed it well, the last time; sometimes events get scheduled without even finding out if the musician(s) can make it.They're just shut out.Again, it's just an oversight, people aren't thinking, but it's a breakdown in teamwork and makes the musician feel like a second class officer.The message it sends is "We attach no importance to your music making for the success of the event, and we can manage well enough without it."Then, supreme disgrace, after the event is over and the cast members have congratulated themselves for a job well done, not one living soul thinks to tell the musician he was missed.This state of affairs, if it occurred only one time in one jurisdiction, would be occurring too frequently; but, I'm sorry to say, it's happened more than once.Do the musician a favor ...Remember him (or her). Don't just carry on without them. They play an integral part in forming the impression left upon those who attend the event.The next time you hear them play for you, give them some feedback ...Recognize the hard work they've put forth ...Give credit where credit is due ...Don't just leave ... make a point to take 30 seconds off the remainder of your life to seek them out and just make it known to them that you liked what you heard ...Give the musician, whoever they are, a pat on the back ...It costs nothing ...I can tell you that it takes guts to sit up there and play; it takes the patience of a saint and the testicles of a bull; and it takes plenty of grit to prepare for it.Some musicians, unbeknownst to you or anyone else in the audience, may be suffering internally from some nasty aches and pains, a severe illness, or recuperating from some complex surgery that nearly took their life, and they had to move heaven and earth just to get themselves there that day.Did you ever stop and think that what may be going through a recuperating musician's mind is whether or not this might be the very last time they can perform for you in public because of deteriorating health, that they love what they're doing, and they could be in an upset frame of mind over it? ...What a shame if everybody leaves after a whole morning or afternoon of listening to this person play, and we learn that nobody, not one soul, came up to them afterward and even offered them so much as a "thank you," or "sounds good!"This very thing occurred with one organist on several occasions, I'm sorry to say, and everyone must have liked what they heard because there were no complaints.And our leadership wonders why they can't seem to recruit or retain a musician ...That musician will appreciate your kind sentiments more than you can ever know.And, you'll feel good about it, too.