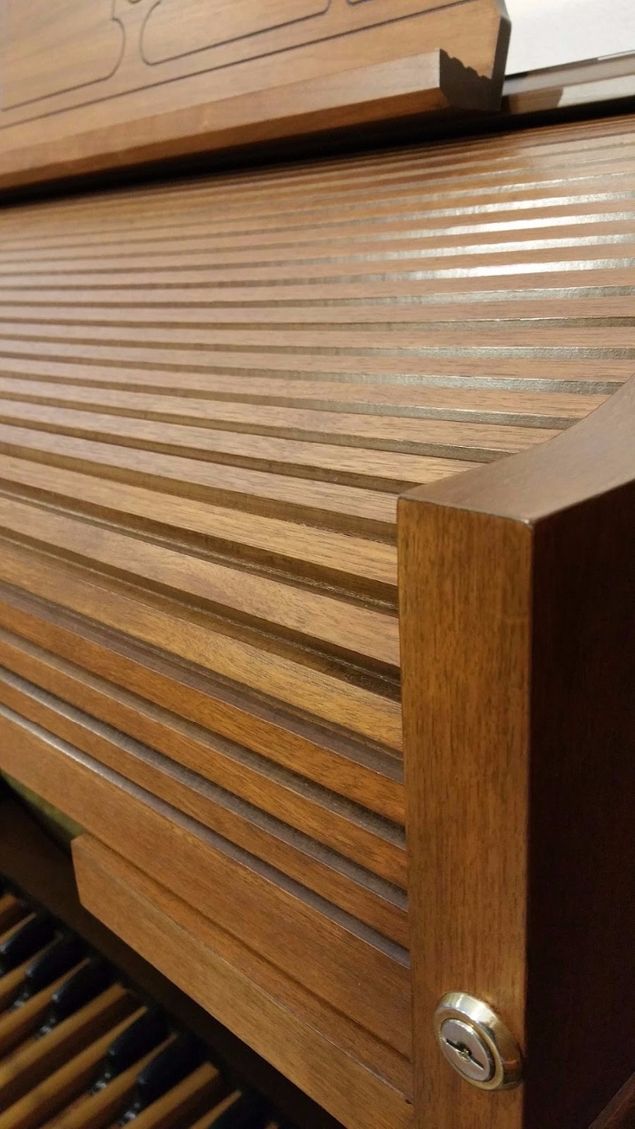 "Sorry, but we don't need organists here any more; we've locked up the pipe organ (photo); we've gone to guitar praise band; we feel it better fits the style of music we're using now."Think of going away to college, taking organ lessons on campus for the sake of working in this music ministry [See blog, An Anointed MInistry, Parts I, II], working to develop your highly specialized playing skills to the highest level of proficiency while you're away, even donating your time every weekend to playing for some local worship center that had a pipe organ, then, upon graduation, returning home only to be told something like this by the cantor, priest, or minister of your own worship center.The King of Instruments -- locked up and, for all practical purposes, gagged and left to die.And it's happening all over this country.This isn't just a shame; it ranks with locking up and silencing for no good reason any other King who inspires, strengthens, and gives purpose to and unites the people, ignoring his needs for so long that, if he WAS released, he could barely assume his role any more [See blog, Fraternal Organ Playing, Part VII]Indeed, it's a disaster.In many worship centers today, there's a section up front, often on a slightly elevated dais, that holds the modern day equivalent of a small singing group, percussions, and continuo [See blog, Continuo Organ]; there's a drum set, stands for lead guitar and electric bass, an electronic keyboard to fill out the harmony, maybe also a vibraphone, marimba, or tambourine, and some microphones, one of which being reserved for the lead vocalist, and all of which seems to be buried in a tangle of gig cables.Several people at any given time might be seen moving around the platform setting up and adjusting levels; in many such places, the pipe organ in the room, if there is one, sits mute.It does so by choice of the back-up group performers who don't consider it suitable for the type of worship music being supplied to them and the clergy these days by so many music publishers.This has taken it's toll on the number of organists we have; some have retreated to the larger Episcopal or Lutheran churches where traditional, high quality organ music is considered standard fare, some have left for the field of education or for the concert stage, and some major talents have even been lost to other occupations, just to pay the bills.It's also virtually impossible to interest any young person in learning to play an instrument that's been placed off limits under lock and key all the time.Virgil Fox [See menu bar, Videos], when he was very young, at his first occasion to lay his eyes upon a pipe organ console, exclaimed, when the fallboard was raised, "Oh my gosh! ... I've seen this before."He went on to become America's most controversial and successful organist, opening the door of organ music, primarily the music of Bach, to a wider audience of younger people than anyone else in history.Just about any musical instrument can be used to offer praise to God (Ps. 150:3-5), but praising the Almighty with a "joyful noise" and leading a congregation to sing are 2 different things.The organ, by its very nature, is still the very best way to lead a congregation; it can be powerful and authoritative in a way no other musical instrument, or group of instruments, can; it can play all the voice parts simultaneously and thus encourage people with all voice parts to sing.Organ pipes sounding on blown wind also mimic the human voice and, by being winded, can actually breathe; the organist can also lift the hands at the end of each phrase to indicate when the congregation is to take a breath at that spot; strummed guitars, drums, and other percussive instruments, including the piano, cannot do that.Using the pipe organ in worship does not mean giving up any freedom to employ other musical instruments; but if we return to implementing more of the traditional liturgy-supporting hymns and songs at our places of worship the organist could again become a more visible and critically important part of the worship community [See blog, Visibility], reclaim his or her birthright in the land of musical sound as master of the most stupendous and wonderful musical instrument of all, and use the voice of the pipe organ, the instrument of choice, to help uplift, inspire, edify, strengthen the faith, and unite the people of God.A worship center doesn't have to be just a place of religious contemplation, but through its music program it can give back to the community added value; and with 700 years of organ music at the forefront of that program, it can become a cultural center where extra-liturgical musical events may be planned.All of this activity might even allow us to be able to recruit more people to play the pipe organ.If we would just unlock the King.