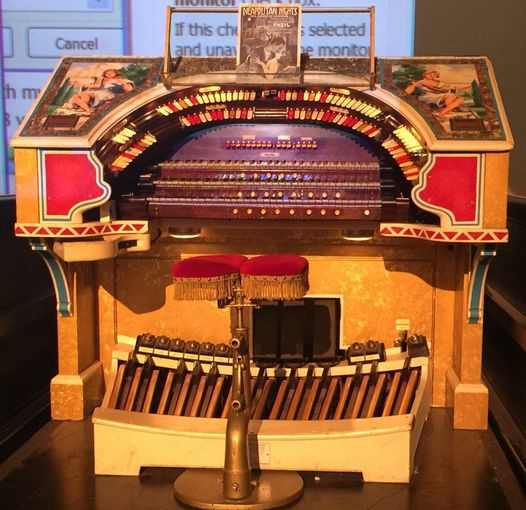 Billed as the ideal bench for a theatre organist, the so-called Howard "Wonder" Seat (photo) was invented in the heyday of the silent cinema to provide an unobstructed view of the organist's feet and a more comfortable and flexible alternative to the traditional stationary organ bench, as theatre organists would be on the bench for extended periods accompanying silent movies and entertaining audiences during intermissions and between featured films.A 2-manual Wurlitzer model 160C theatre pipe organ of 6 ranks was installed in the Temple Theatre in Hammond, Indiana, in 1921; this model was unusual in that its bottom manual was 88 keys having a split point at middle f#, which allowed it to function as a 3-manual; the console at this venue was also installed in an unusual way, on a very small movable cart that made it possible to move it from the balcony to the ballroom but impossible for anyone over 5-foot-5-inches tall to play it.The first organist to work professionally with this instrument was E.H. Howard, who is credited with inventing a special seat for this console which bears his name.Because theatre pipe organs were typically installed in the orchestra pits on very narrow turntables and lifts, the Howard Seat was widely supplied for these instruments all over the world, where space was compromised and the organist had to remain on the bench for extended periods.This seat was a sort of double bicycle-saddle arrangement with 2 heavily padded, felted cushions for the buttocks supported on minimal steel tubing fastened to a large and flat iron pedestal which slid part-way under the pedalboard, thus occupying almost no additional floor space; the heavy iron plate provided great security, and the top of the seat, which was adjustable in height, was set on a turntable that swiveled to accommodate the turning of the body and was offset forward "to diminish the problem of leaning forward and the feeling of falling off the bench." The cushions also were typically notched at the back to remove any pressure from the tailbone (coccyx).In reality the sensation of feeling like you're falling forward off the bench in assuming the correct playing position isn't really a problem but helpful in determining where that position needs to be for good balance.The player sitting correctly on a traditional bench is perched clear up on the edge of it, and it should feel like one is almost going to fall off the bench; this feeling is counterbalanced by the spring tension in the keys pushing back like a trampoline; the result is equilibrium, with the fulcrum being right around the waistline.If one's habit is to sit a little further back on the bench, the legs aren't as free to move, one would have to lean forward from the waist, tension would develop in the shoulders, neck, and back with both hands on the top manual, fatigue sets in, and the Howard Seat in such a situation would have seemed like a Godsend [See blog, What About Bench Position].Theatre organists who used this seat had to first learn to "ride" it so they became accustomed to its action, but some performers used it exclusively; it's claimed that the famous theatre organist Jesse Crawford in fact demanded a Howard seat for all his performances because of the freedom he said it gave him.Other organists saw it as a frightful invention to which they could only give a big thumbs down.The concept behind it was to save floor space on the lift, give the audience an unobstructed view of the organist's feet, provide more freedom to the performer, allow the organist to swivel around and talk to the audience between songs, and, more importantly, make it easier on the bottom for extended periods of practice or during shows.What it DID give an organist, unquestionably, if the bushings in the swivel were worn, was a sense of insecurity and backache.Organists come in all different sizes, shapes, preferences, and they're all wired differently, thus this type of seat will be welcomed by some, received with indifference by others, and perhaps even condemned by a few.