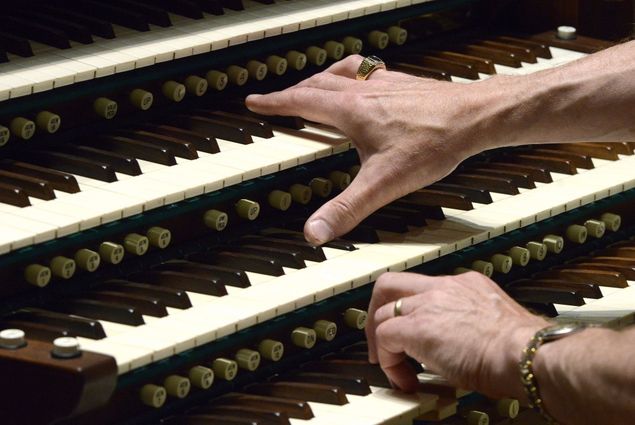 Organists who play on instruments of 3 or more manuals are free to employ the technique of thumbing down, this to be able to play 2 separate melodic lines of different tone color with the right hand across manuals, simultaneously (photo).This technique developed in France during the 19th century, notably in the organ compositions of Alexandre Guilmant, Charles-Marie Widor, and others, although Guilmant is usually given credit for originating it.This is done by first drawing single stops of contrasting tone colors, e.g., flute and reed, on adjacent manuals, holding a note with the thumb on the lower of the 2 manuals, such as the Great, and allowing the remaining four fingers to move on the manual immediately above it (the Swell, in this case).The process can also be reversed, i.e., the held note can be on the manual above with the moving notes taken by the thumb below.When such passages are written out, the score for the right hand part will show 2 staves; the part for the fingers will be marked on the highest staff, and the thumb notes will be marked on the staff right under it.This technique is demonstrated in the closing of "Jingle Bells," a video which may be viewed on this web site.