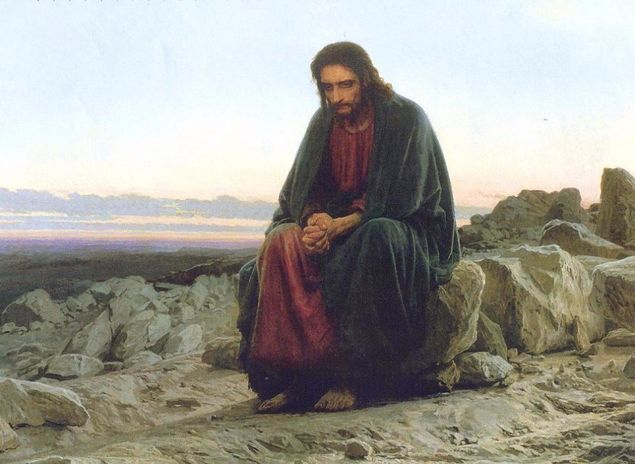 "Christ In The Desert," oil on canvas, by Ivan Kramskoi, 1872.While traveling home today in the car from a conferral of the Order of the Temple, I was listening to a CD recording of Olivier Latry performing on the magnificent Cavaille-Coll Grand Organ of the Cathedral of Notre-Dame de Paris.The piece to which I was listening was "Sur Le Rhin," from 24 Pieces de Fantaisie, by Louis Vierne, who composed this music with this particular instrument, and this particular building, in mind.Having performed the musical accompaniment for the conferral today, and while listening to this work on the way home, the music evoked in me the subject of Kramskoi's painting ... that of a certain Jewish carpenter sitting alone with His thoughts at a time when He fully realized that He was on a track that only He could travel ... that He was approaching, day by day, the end of the road ... and at the end of that road would be a cross with His name on it.The thought of it must have landed on Him like a ton of bricks, haunted him continually, and tested His resolve at every turn.Vierne's music, Sur le Rhin, is a composition in ternary [ABA] form which begins with an austere, almost oppressive hymn-like 1st theme in long notes in the dark, gloomy key of eb minor; this is followed by a middle section of lighter weight which presents a 2nd theme in g minor in a slightly more lively tempo; after a time this builds into a furious climax over full organ, culminating in a return of the 1st theme in eb minor in heavy, massive, ponderous chords that seem like they have the weight of the whole world on them, shouldering each other aside; this resolves at last on a glorious, crushing, held Eb major chord that seems to triumph at the end over everything else before it.This haunting 1st theme, to me, evokes the awful thought of the cross which Jesus tries to put out of His mind temporarily during the 2nd section, only for the same, horrendous thought to return in His mind at full tilt to dominate everything, but then, through a series of craggy harmonies, resolves at the end finally in a majestic major chord of bone-jarring, awesome power that visualizes the glory of what He knew was on the Other Side of this agonizing death.The 2 themes are never combined, nor do they lend themselves to combination, which, I believe, was deliberate; it's as if the composer desired the return of the 1st section to depict nothing else but the cold, heartless reality of what was waiting for Jesus at the end of the road and its sheer incompatibility with anything intricate or beautiful.We cannot know what Vierne had on his mind when he wrote this music or if some image, if any, from his imagination had evoked it, but it's a safe bet that the powers of creation which have their home in heaven governed and guided his musical thinking at the time [See blog, The Book].Music itself evokes images like this from the imagination, and it works in reverse; other images from the imagination evoke the creation of music, whether written or improvised; this has been shown many, many times, by various composers -- for organists, most notably perhaps by Marcel Dupre (1886-1971), with his "Le Chemin de la Croix" (The Stations of the Cross), Op. 29, one of the most significant and deeply spiritual musical works of the 20th century.Dupre (who studied with Vierne), with his prodigious technique, photographic memory, mastery of musical analysis and compositional skills, pedagogical talents, rich artistic imagination, and deep religious conviction, virtually dominated the "organ world" of the last century; he was for much of that time an international celebrity in the wider cultural ambience of both Europe and America.This magnum opus of Dupre's consists of a collection of 14 separate movements each evoking one of the 14 stations; Dupre excelled in the art of improvisation traditionally cultivated by French organists, and this is how this major work came to be; afterwards, he spent an entire year committing it to paper.Therefore, when you sit down to the table to write something, or you sit down to the bench to improvise something, if you have some mental image in view throughout ... a scene from nature, a human activity, a story, an historical event, for example ... that image can be used to lead you; the result with be a musical evocation or commentary on what you're seeing in your mind which can, in its turn, bring to mind or remembrance something of the same thing among those listening to your music making.