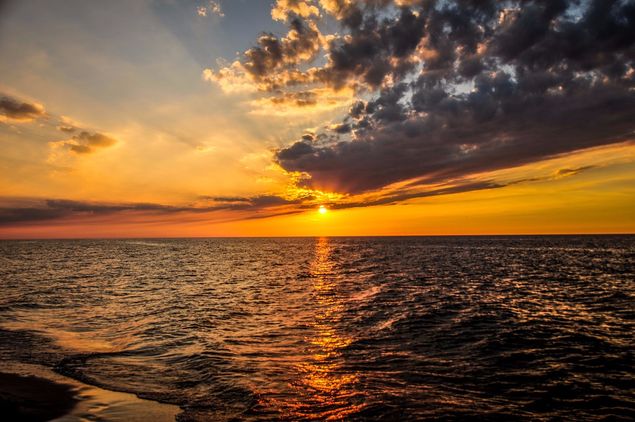 (con't from Part VI)Just like the sun arriving near the horizon at the close of the day, bringing with it a view that never fails to arrest the attention (photo), upon arriving at the final verse of a hymn by means of a modulating interlude we can infuse additional interest, energy, and color into our hymn playing, and take it to the next level, by performing that final verse in a higher, brighter key with an alternate harmonization, i.e., one that's different from that printed in the hymnal.Classically trained organists used to look down their noses at the practice of changing keys on hymn verses, but in the last few years the attitude toward modulating interludes has started to change.Probably one of the greatest contributing factors to that change is the recently discovered proof that J.S. Bach the organist was "guilty" of modulating during hymn leading; it therefore cannot be denied that there is a tradition of changing keys during a hymn and that its proponents have included some of the greatest musicians.Those who advocate modulating point to its usefulness in congregational singing; it breaks the monotony brought about by the feeling of being locked in one key.The effect of modulating up one half step for the next verse is more liberating than that of moving up a whole tone because the keys are more distant on the Circle; a higher "lift" is therefore experienced when going up a semitone than when going up a tone, and it "spices up" the singing, keeps the hymn fresh and meaningful, and gives the congregation new energy.Key changes are not appropriate for every hymn and every situation.If a modulating interlude isn't in the character of the hymn and doesn't express a similar sentiment, musically as well as thematically, it can detract from the hymn, even destroy it.There are times however, such as when the hymn is a processional hymn and the aisle is long, that we might need to play a little longer to give the clergy and choir a little more time to get to their positions for the singing of the final verse.In this case a modulating interlude is the perfect way to make the music better fit the time requirement.It's always the text that should inspire and guide the organist's playing.J.S. Bach composed 413 arrangements of hymn tunes from the Lutheran hymn book of his day in 4 parts for singing; these Chorales, being excellent examples of 4 part composition, are still studied today by theory students.These Chorales however are more complicated than what we find printed today in standard hymn books which are published for singing, not for playing the organ.Because hymns from the hymn book are not meant to be played but sung, hymn books are just not "organist friendly."Hymns are choral music which needs to be adapted, interpreted, and arranged by the organist to come across on the keys and pedals of an organ if the performer is going to play effectively from a hymn book.No organist today is likely to advocate an interlude after each line or verse; most of us have no time for that sort of elongated hymn singing, but we shouldn't go to the other extreme, either; we can't expect to get anything but the most superficial impression of a great hymn if we rip through it in an "upbeat" tempo in a desperate attempt to make it appear lively.We play our interludes and modulate between verses because it's an organist's way of offering praise to God, adapting the music to fit a time requirement, and of energizing congregational singing. If the singing is already robust, then it may not need energizing.The great hymns in our hymn books ought never to become stale and dull; through sensitive interludes between verses they can be "dusted off" and made to shine as if new.The last verse especially can often be given appropriate emphasis when introduced by an interlude which, if done well, can transpose and transport the mind and the soul to a higher realm.The goal of these interludes, if used, is to do one thing, and that's to enhance worship.As hymn leaders, we organists need to be inspired by a genuine desire to help congregations sing better -- sometimes by adding interludes, sometimes by modulating and transposing, sometimes by stepping back and not playing at all, and always being willing to deny ourselves and sacrifice the showcasing of our technique, if need be, to serve the faithful who are sitting in the pews.(con't in Part VIII)