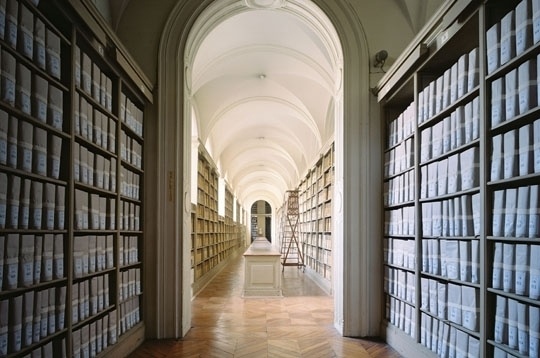 (con't from Part VII)Organ music doesn't just add heart or feeling to the alleghories and symbolism found in fraternal ritual work; it adds intensification to the lessons and stories themselves.This intensity can be in the form of dynamic, startling harmony, consonance/dissonance, even silence maybe.And every fraternal organist has, or should have, their own way of providing it.To prevent the loss of knowledge and to preserve what is worthy of preservation is the purpose of every system of archiving (photo).Musicians, for their part, spend their lives learning a highly specialized skill and, unless they leave behind a memory of their work among their friends and brethren, they can pass, after a life well spent, to the other side of the Great Beyond taking everything they knew with them.Unless someone else made it his business one day to pull up a chair, sit at his knee, and learn from a fraternal brother while he's still alive, all of that learning, knowledge, and experience can no longer be accessed -- no longer available for the next generation of members who will be serving our benevolent organizations and charitable institutions.It's highly advisable therefore, to place on deposit somewhere in a safe archive the materials and methods a successful fraternal organist used to accompany the work and produce his effects, so that others might learn from it, be inspired thereby, and draw encouragement from those same discoveries and success stories.One concrete example will illustrate this:Some years ago this author knew a dear friend a good bit older who before his death used to supply the musical accompaniment at the organ for certain meetings of his state and local Masonic organizations where he held his memberships.On one of these occasions this author made it a point to pull up a chair next to him, introduce himself, and observe what he was doing, what he was playing, and how he was playing it.He played quite well but only in major keys having the fewest numbers of flats [F, Bb, Eb, Ab] or in the key of C.When he was questioned about this, he said he restricted himself to these keys to because he "couldn't read the sharps." (?!)He was serious; evidently he just never spent enough time as a younger man learning how to read in sharp keys, even though the process of training the brain to do this is practically identical to reading the flats.The point is, he overcame this handicap successfully enough that what he did play, and how he played it, was enough to serve the immediate need and actually was in demand.Today, this author is the only person alive who can explain how this gentleman produced his effects, how he was able to succeed at what he did, and how encouraging this can be to someone who has themselves convinced that they can't overcome the problem at hand.There's a lesson in this, that even in the presence of a serious handicap (a handicap which can be eliminated with practice but never is), a determined player can STILL overcome it to where their playing could serve a need.(con't in Part IX)