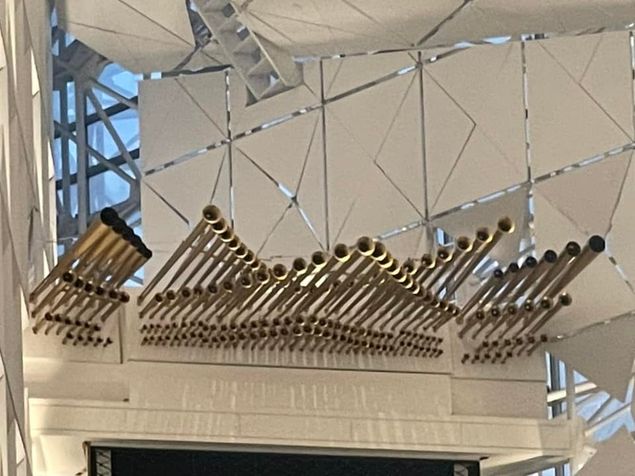 Any free standing pipes mounted horizontally at the front of the case, when there is sufficient room, will sound louder than if mounted vertically among the other ranks of pipes.A big solo reed, when mounted this way, is called a Horizontal Trumpet, or "Trompette en chamade"; it also exists under other more expressive names in certain organs, e.g., Festival Trumpet, Trompette de Fete, Cor de Gabriel, State Trumpet, Crown Trumpet, Herald Trumpet, Heroic Trumpet, etc.This stop's main function is for fanfares and for carrying a line over the top of the full organ; in this respect, it works as a Tuba Mirabilis rank, only less able to enter into combination than the latter due to its unenclosed position and lack of flexibility and expression [See blog, The Loudest Stop].A voice like this works beautifully for soloing the tune in one of the verses of a ringing, triumphant hymn, provided it's tone isn't overwhelming; certain examples of this stop are voiced so unbearably loud that, even all by themselves, they cloy upon the ear too much to be used for anything at all [See blog, Context Matters].Great care must be exercised therefore in the voicing and regulating of this stop so that, when it is drawn, it balances with the rest of the organ without any ear splitting effects [See blog, Wind Pressures].