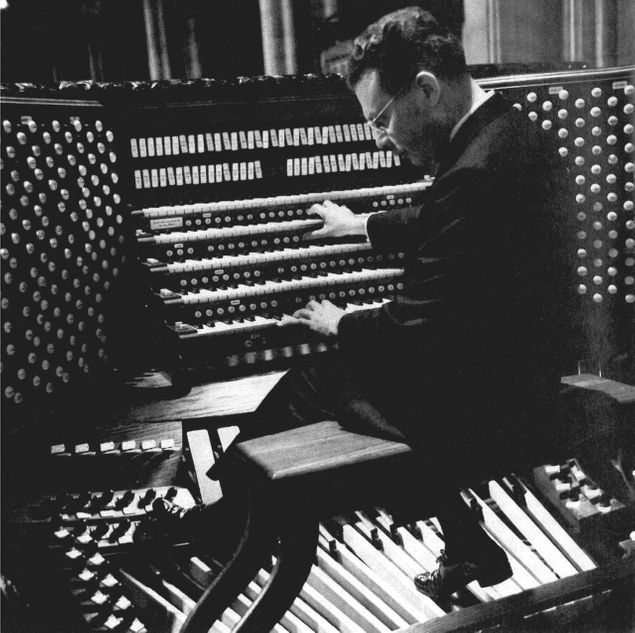 There are times when an organist faced with playing in an extremely dry acoustical space does "tricks" to make the room sound with more "bounce."In a large space where the reverberation field amounts to less than one second at maximum full organ (the Saint Louis Scottish Rite Cathedral Auditorium is an example of such a place), then an acoustical release of big final chords for both hands can be used to provide a better bloom to the release of final, big chords.This device was given great attention by the late concert organist Dr. Virgil Fox (1912-1980) and his acolytes to create the illusion of size and space, making the sound of a final chord "bloom away" more gradually; he found this this tends to work best with final chords when the hands are spread over at least 8 notes covering 2 octaves.We do not see this used so much, and it is not universally taught in schools of music or in private lessons; instead the subject is rather deliberately never brought up, and when the student inqures about it, the technique is sometimes mocked -- the student is simply instructed to be very careful to release each note in a final big chord at precisely the same instant.The usual observation however is that the highest final notes in the right hand tend to be released a minute split of a second late resulting in a thin, pinched ending to the sound, a tendency which is counteracted when a downward acoustical release is adopted and the lowest pedal note is the last to be released.In order for an acoustical release to work however, it must be done very, very fast to where it's almost unnoticeable to the viewer.This is not as easy as it sounds and takes some practice to perfect.If we're improvising let's say in 4 part harmony, and we're wanting this type of release at the end, then we might add more voices until we arrive at the finish with several notes at the point of release.If we're performing repertoire, it also works well enough when we use whatever final notes the composer wrote on the page for our downward release.Some organists take liberties here and "load up" for an acoustical release by duplicating notes in the harmony that weren't written into the score, the object being, of course, to multiply the final number of keys being held down with the idea of creating a larger, more grand crescendo at the end and the effect of a diminuendo when they're released downward.Even before Virgil became head of the Organ Department at Peabody Conservatory and played for New York City's Riverside Church (photo) he became a master at this, particularly with his Bach playing; he insisted that if Bach were alive today he would be very much swayed as a composer by the possibilities offered by the modern organ, and if he were faced with performing in a very dry space equipped with pneumatic assisted action, multiple swells, electrically operated couplers, and adjustable combination pistons, he would be taking advantage of everything that modern organ has to offer, adding and subtracting stops and couplers in large clumps, injecting fire and drama into his music, doing exactly the same thing as Virgil was doing, and rewriting his music to take fullest advantage of it.Still, we have to be very careful in supposing what a composer of bygone ages would or would not be thinking or doing today and making one's own arrangement of a composer's finished score, as Virgil came under fire heavily for it.With Virgil's acoustical release the notes of the final chord are released extremely fast one by one from the top down, like a bunch of airplanes flying in formation and they all "peel off" together with the lowest pedal note being the last key released, only much, much faster.This maneuver can be facilitated using a very slight rotational movement of both wrists counter-clockwise, first the right, then the left.This wrist rotation can be practiced separately at first, one hand at a time, until the ear hears each note released in gradual and correct order in rapid succession.Afterwards the hands can be practiced together, working slowly at first to get a smooth "splice" of the hands with no noticeable overlap between the notes taken by the thumbs, then speeding up.There's another way to do an acoustical release of a big, final chord in spread harmony for both hands, and that's by turning each hand out so that the top note and bottom note of each hand are the only ones remaining depressed until the very end, so that the middle notes of each hand drop out faster and leave the impression that the sound lasts a little longer.This type of acoustical release is practiced by certain European organists.Whichever type of acoustical release is used when performing before a large audience there's no need to throw both hands 3 feet into the air as if the hands had been somehow stuck to the keys until then and had to be pried loose; this kind of stage bravura may impress the visual senses of viewers who don't know any better, but it has nothing to do with tone production; it's theatrics, plain and simple.In a space with reasonable reverberation an acoustical release is, of course, usually superfluous; in this situation the fingers and feet on final chords are released precisely at the same time and raise no more than a couple of inches off the keys before coming to a stop.This is called a "Gleason release" after the late concert organist Dr. Harold Gleason (1892-1980) who, among other things, was the first head of the Organ Department at Eastman School of Music and the author of "A Method Of Organ Playing," now in its 8th edition, a widely circulated and respected work used to train countless organists.