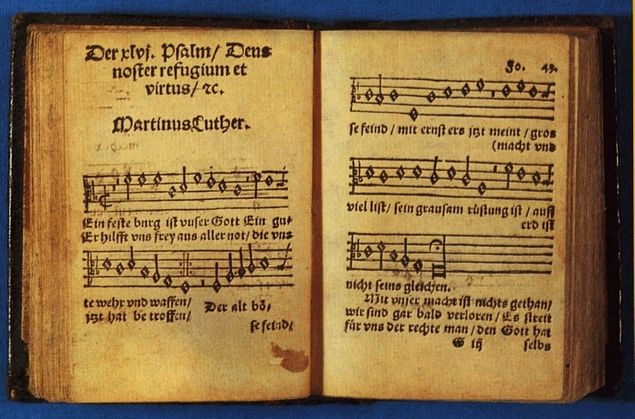 (con't from Part II)J.S. Bach, during the course of his career as a church musician, took the tunes found in the German Lutheran hymnal of his day and created 4 part settings for every one of the 354 hymn tunes he found there.Some of these were ancient modal melodies that he reharmonized in the major/minor system, thus linking the modal harmony of the Renaissance with what we could consider the tonal harmony of today [See blog, Modal Harmony].For certain hymn tunes sometimes he created more than one setting.He performed these settings both individually and by working them into his church cantatas and other larger compositions.Those settings which have come down to us have been collected in many editions; the most complete collection of these has been published under the title "J.S. Bach, 413 Chorales," edited by Christopher Czarnecki.This book is written in very clear notation with each chorale on one or adjacent pages which require no turning, and is spiral bound to sit well on the rack.It's important to get a copy of this book.It can be argued that this collection of Bach's chorales is just as important, perhaps even more important, to the development of the organ scholar as are Bach's shorter 2 and 3 part fugues (Inventions -- 30 in number), and both volumes of the "Well Tempered Clavier" (called "The 48"), each of which contains 24 preludes and fugues in all the major/minor keys.His 4 part Chorales are probably better known to theory students and those who wish to study the rules of voice leading, but they also make good practical repertoire for general use which can be applied in a variety of applications which might include incidental music, advanced sight reading exercises, and material for hymn based improvisations [See blog, Hymns, Part VII].This photo shows Martin Luther's 1527 anthem "Eine feste Burg ist unser Gott" (A Mighty Fortress Is Our God) -- the battle hymn of the Reformation -- as it would have appeared in the 1529 first edition of Joseph Klug's hymn book, which volume has been lost.This image has been taken from the 1533 second edition, the earliest known copy. This is just one of hundreds of hymn tunes in early notation which Bach harmonized, with which he would have been very well acquainted.This example is notated using the alto clef (C clef, or middle C, on the 3rd line) and an F major key signature; save for a repeat sign, there are no bar lines.It was the usual procedure in Germany for hymn books of that time to print the words of the hymn and the melody (top, or soprano) line only for the congregation to sing; the organist was expected to play from the same book and fill in the remainder of the harmony on the spot.There are many reasons why hymns like this need to remain the backbone of the musical program in places of Christian worship, and not be replaced with FM-style contemporary praise tunes:First of all, the singing of hymns is biblical [See blog, Hymns, Part I], and it's hard to argue with what's recorded about it in Holy Scripture (Matt. 26:30, Mark 14:26, Acts 16:25, 1Cor. 14:26, Eph. 5:19, Col. 3:16).Hymns also connect us to history; we live in a society today that is about the here and now; the 24 hour information cycle has created an attention span of about 20 seconds where people think they need the latest and the greatest.When we sing a hymn from the 8th century, like "Be Thou My Vision," we are reminded that God has not changed in an ever changing world and remains faithful to His promises.As members of a fickle human race, we stand to benefit by being reminded that we stand on the shoulders of many who have gone before us, and we've been entrusted, as Paul encouraged Timothy (1Tim. 6:20), to "guard the deposit entrusted to [us]."Singing hymns rooted in history gives us that wonderful connection with those who have gone before us.Modern hymns, in turn, connect us with those who will follow after us.We take Paul's admonishment to Timothy as leaving a legacy that will withstand cultural shifts and musical turns.Hymns also connect us with each other; when we stand in a congregation which sings hymns, the collective voice is typically lifted because everyone is held accountable to the task.There's no gazing up at performers on a stage like in a concert setting; there's no serving as a kind of karaoke, sing-along participant while the team on stage showcases the vocal abilities of the soloist; there's no standing as a solitary observer within the congregation, passively consuming only what is being given.A congregation singing hymns demonstrates that its participants want to actively engage all their collective heart, soul, mind, and strength.Hymns also connect us to theology and teach complex truths in a succinct and understandable fashion; children can be taught theological truth through song, and so can adults.Hymns also lift up our minds and direct people to thoughts of God and higher things; hearing a scripture based hymn performed at the organ strengthens a person's faith because faith comes by HEARING.Something a person hears causes their faith to rise (Rom. 10:17).Hymns therefore are not dead and outdated; sure, some of them can be presented that way, but so can any form of music.Advocating hymn singing isn't advocating for boring music but just the opposite; when people know what they're singing, and why they're singing it, the majesty and glory of God's name prevails over personal preferences in musical stylings.Hymns have endured a lot longer than boy bands and girl groups from 5 years ago, and it would be a shame to see our generation drop this treasure passed down to us.(con't in Part IV)