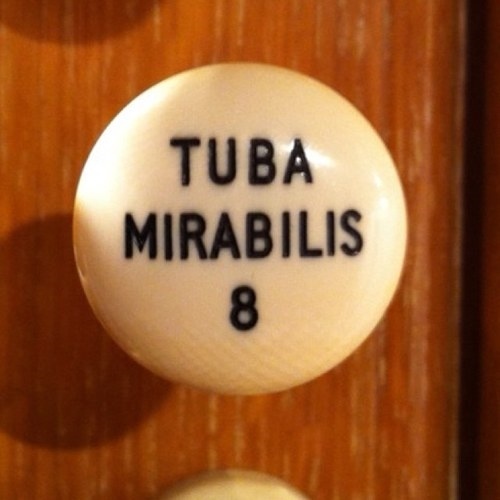 The Tuba Mirabilis (also labeled Tuba Magna, Tuba Major, or Harmonic Tuba) is an assertive chorus reed stop of smooth tone; when there is no Horizontal Trumpet in the instrument the Tuba Mirabilis is typically the loudest voice in the organ [See blog, Horizontal Trumpets].This Tuba stop is primarily used for fanfares and as a solo voice which can carry a line over the top of the full organ; it works beautifully for soloing the tune in one of the verses of a ringing, triumphant hymn, provided its voice isn't unbearably loud.Accordingly, this big reed is best served when assigned to an expressive division of the organ where its powerful voice can be given flexibility and expression, which would increase its utility at least ten fold.If this rank is voiced less assertively and put under expression this way, its blending characteristics might allow it to enter into combination to create an additional level of sound, a final "punch" if you will, to the full organ for climactic passages; some experimentation would, of course, be required here, with the ear being the final judge.In the grand scheme of things, this type of voice is most valuable when it teams up with all the other stops in the instrument, and there seems to be a lesson here:As individuals, we can't all be "the loudest stop" there is, nor would we want to be.If we were, we might be heard above everyone else at times, but there would be much, very much, music making going on all the time into which we could not insert ourselves.[NOTE: There are other stops in this general class, of similar construction, which in certain examples are voiced even more assertively on still higher wind pressures, that go by other names, e.g., English Post Horn, Harmonic Trumpet, Crown Trumpet, Ophicleide, Tuba Ultima, etc.; and, not every instrument has a big reed like this one; this Tuba stop was spotlighted to make a point ... not only about the tonal resources of a pipe organ, but also about people].