An Anointed Ministry, Part I 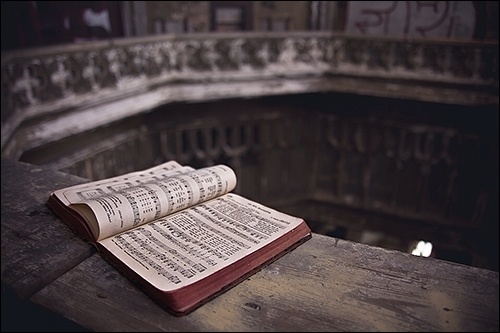 The question of whether or not people who use the organ to lead congregational singing in a proclamation of faith within the walls of a worship center should be faith-filled themselves has become a controversial subject.Some take the position that it's an extreme view to require the organist to express religious beliefs before being hired by a worship center; others insist that it's a necessary requirement and that it would seem disingenuous, if not hypocritical, to do otherwise.The fact is, religious organizations are not exactly known for free-thinking tolerance and respect for philosophies alien to their own teachings, but, at the same time, organists who work as church musicians are employed in a job which has pastoral dimensions as well as musical ones; this means that the job of church musician/organist is something more than the job of a theatre or concert stage performer.The music ministry is grounded in prayer, not performance.It should come as no surprise therefore, that the music-making done by the church organist bears a relationship with how that church evangelizes; much however depends upon how the church organist views his/her job; if all (s)he thinks is that they're hired to play and that what they believe has nothing to do with the notes they play, they take exception to this.The condition of this broken world combined with bitter personal experiences have hardened the hearts of some musicians who play the organ against embracing ANY form or religion; they don't care if others do, but, as for them, they're just not interested.For those who have openly declared their lack of faith, it doesn't mean that they're playing isn't beautiful, but pastors aren't always sure they can help people pray with music being made by someone who doesn't believe in something; and, to be honest, that leading doesn't fall entirely on the theologian present.Non-believing organists have reported that no one at the church where they work has ever attempted to convert them or even ask them for their religious beliefs; the people there simply love hearing the organ and have shown their organists that they really appreciate what they're doing; they seem to respect the fact that the organist may not be interested in being questioned or having anyone chastise them for not being on board with THEIR beliefs.Sadly, there are forces within the Christian church which feel that an organist MUST be a practicing Christian to even qualify to play a pipe organ and that non-Christians have no legitimate claim to play their instrument; these are the same stereotypical hypocritical forces which condemn and judge all non-Christians, atheists, agnostics, and those holding differing views but sure love God and Jesus.The view that music is its own religion however, as some claim, is a contradiction in terms and equally wrong.Everyone develops their own spirituality in their own time and space; fitting someone else's dogma, in this church age, should not be an absolute requirement, and, if it is, it probably wasn't going to be a good fit, anyhow; this is for God to work out, in His own good time.Organists are still free to consider whether or not to work for a worship center which requires such a litmus test.Here's the truth: God withdraws from sin, but He's also not going to brow-beat people into submission to His laws of life and good; when people come closer to Him in prayer and by respecting His laws and statutes, He comes closer to them and makes His home with them.In so doing He complies with one of the laws He Himself has set in motion to govern a person's success [See blog, Law Of Respect].Because His laws of life and good have been pushed to the periphery of human society and trampled underfoot, because efforts have been underway for years to remove all references to God, Christ, and the Bible from the public square, He has withdrawn Himself from this sinful world and, for now, has a "hands-off" policy with mankind; to non-believers this is foolishness, but it explains why a loving God seems to be so far away when tragedy strikes -- why He does not prevent or seem to respond to our pain, tears, heartache, or troubles -- why He allows acts of inhumane and unspeakable evil to be perpetrated all over the globe.He sees but doesn't respond to any of these things; what moves His hand ... is FAITH.In His Word it says that faith (trust and confidence in Him) comes by hearing [Rom. 10:17]; so then SOMETHING A PERSON HEARS causes their faith to rise.We may be learning organ playing as a hobbyist or simply for the esthetic experience (because it's something we like); but when we learn to play a Scripture-based hymn or anthem (i.e., one with words that reflect the brotherhood of man under the fatherhood of God) we might think we're doing it as an exercise simply to develop our playing skills, and that's all; but when someone else hears it, and they're not within the 4 walls of their place of worship when this happens, and they happen to know the words, it's as if God is speaking to them through the hymn or anthem itself.And it causes their faith to rise.For those organists who have witnessed these effects, they know that this is not some kind of man-made religious nonsense; playing the instrument, for them, is far more than a hobby or even a passion.It's an anointed ministry.(con't in Part II)