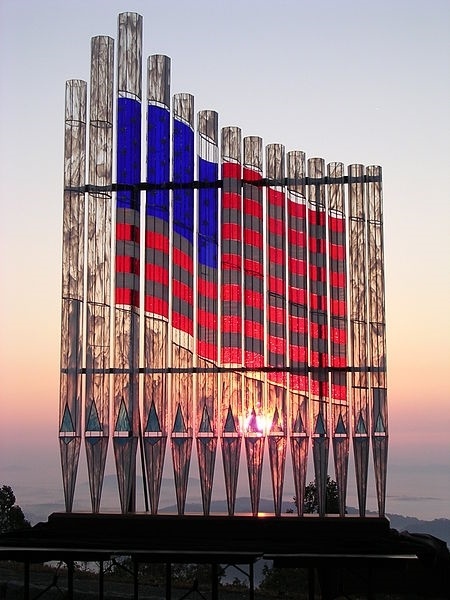 This very intriguing American flag rank of glass organ pipes was created in response to the tragedy of the terrorist attack on the USA on September 11, 2001.This series of 14 real pipe organ pipes were made of glass using kilnworking, stained glass techniques, and delicate pipe organ engineering.The pipes were innovated, designed, and created by a certified pipe organ builder and master craftsman, Xaver Wilhelmy.He has created the first sets of glass pipe organ pipes in the world, and this rank of pipes viewed at sunrise in the Blue Ridge mountains (photo) is one of 2 existing glass organ pipe ranks in the world at this time.The series of pipes comes with a wooden base that contains the technical inner works of a pipe organ, and is controlled with a portable keyboard unit; yes, the pipes actually play; they were professionally voiced and tuned by Wilhelmy.The pipes took this builder and his crew 18 months to create from conception to completion in June 2004.