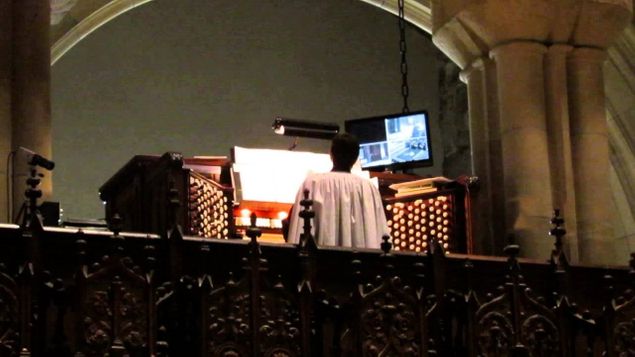 (con't from Part II)"The pipe organ is the instrument of the church because it's so full of imperfections ... much like the people in the congregation." -- George B. KavanaughAs with all musicians at times who love their chosen instrument, the fervor of organists can cause them to take up residence in the ivory tower of idealism, but it's probably fair to say that most people also love the pipe organ in worship; no other instrument, save for the grand symphony orchestra, can even begin to compete with it for versatility, dynamic range, compass, or sheer, thrilling power.It's important to remember, however, that singing can be inspiring and uplifting with a variety of instruments, including no instruments at all.The pipe organ is absolutely important in the history of music in the church, but so is "a capella" singing, chant, and learning music by rote (for non-music readers), all of which came before "musical literacy.""Musically illiterate" singers can praise just as fully as literate ones; if we diminish people because of that "deficiency," then it's like we're creating a hierarchy of worshipers, verging on discriminating against those who think differently.We all have our preferences; many have preferences different from our own, and what may inspire them can be different and just as worship filled.All of this is valid and true; but the superiority of the pipe organ over every other musical instrument in leading congregational singing isn't about preference.There are also some other facts that are indisputable:Piano sound decays; guitar sound fades; electronic sound is ever (yet increasingly less) artificial (and somehow incorrect in comparison) for the God-ordained act of congregational singing ... yes, all Christians are admonished in scripture to lift up their collective voices congregationally [Ps. 92:1, 100:2, Col. 3:16, many other psalms), regardless of their individual singing abilities.There's nothing wrong however with congregants who don't sing; if a church is growing, there's going to be a fairly large number of people who don't sing the hymns and songs because they don't know the words; these are called New Converts.In addition, there are people who won't sing in church because they don't sing at all; they claim they don't like it; they claim they're not any good at it; some of them even claim that hymns are the reason they stopped attending services, that hell has no torture worse for them "than listening to dozens of untrained singers sounding out elevator music," that they attended until they couldn't take it any more, then left, that if you expect them to sing at your church, you won't see them, period.It's important to remember that there are many culturally dependent ways to worship; when someone worships in a way that's unfamiliar to or different from someone else sitting in the same pew, it doesn't mean that they're wrong.Someone can still worship in a way pleasing to God without participating in the singing; being present, praising Him and praying during the hymns and songs instead, is worship, too.Ironically, even those who don't or won't sing, experimentally, will attest to the preeminence of the pipe organ, even when it's accompanied by large orchestral forces.All they have to do is listen to the first verses of "Low in the Grave" on Easter Sunday accompanied by orchestra, piano, and organ (plenum registration); the final verse will see the piano and orchestra taking second chair to the might of the pipe organ as stops are pulled and shimmering and bombastic voices emerge above the other instruments sounding the tune of the hymn with pristine clarity and proud declaration.The result? ... THAT congregation invariably sings more fully and clearly than they will hear a congregation sing in too many Sundays; this is not an affectation, put upon artificially to encourage louder singing; the words of the hymn are triumphal (especially the chorus), and the organ's full power adds to the esthetic truth of the hymn, with profound effect.Thus, the church organ fulfills its purpose.The argument can be made that a solution to maintaining a viable singing congregation is increased use of and dedication to the preservation of the pipe organ.While it's not the exclusive instrument of worship, the fact remains, it's the only stand alone instrument that's capable of mimicking the human voice accurately enough to inspire the listener (however willing to participate) to sing more fully and enthusiastically, and strong enough to support a church building filled to the walls with lustily singing congregants recounting the psalms, hymns, and spiritual songs people are admonished to sing today.We are not attempting here to bend scripture to fit a personal esthetic, but rather to inspire a greater esthetic in congregational singing by reminding people of what we're supposed to do when we worship corporately, and if that entails an increase in the use of the pipe organ, so be it.Congregational singing is not meant to be an exercise in annoyance (which it evidently is, to those who refuse to participate); it's a beautiful act of adoration and love to God and to one another, one which Christians should approach with gladness and reverence.(con't in Part IV)