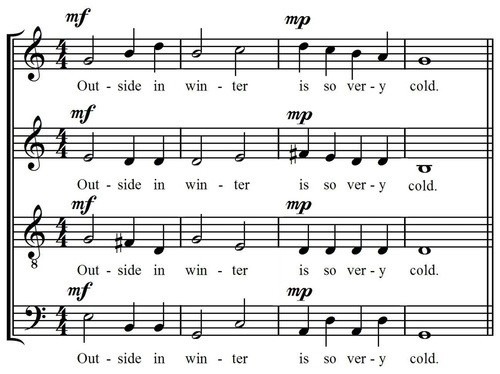 An open score is a piece of music in which every voice part is assigned to its own staff.In order to understand what open score is, we need to look at understanding movable C clefs (soprano, alto, and tenor clefs) and the octave tenor clef.If you can play hymns on 2 staves from the hymnal book, you've already been reading SATB Short Score; here we're dealing with the treble (G) clef and bass (F) clefs only, and stem direction indicates which voice is which (soprano and tenor stems go up, alto and bass stems go down).In SATB Open Score (Older) the movable C clef was used for the 3 upper parts from the beginnings of Western music notation in the Middle Ages until well into the 19th century.The movable C clef identifies the note C4 (middle C) on the piano; the purpose of its use is to keep the majority of the pitches within the boundaries of the staff without having to write so many leger lines.Here the soprano clef (C clef on 1st line) was used for the soprano; the alto clef (C clef on 3rd line), the tenor clef (C clef on 4th line) for the tenor, and the bass clef for the bass; the tenor is written at actual pitch (not an octave higher).In choral writing the tenor clef is commonly replaced by an octave treble clef with an "8" (ottava) sign appended to the bottom of the clef; this is a compromise clef which reads exactly as treble clef but "sounds" down an octave, conforming to the range of the tenor voice. Therefore In SATB Open Score (Modern) there are also 4 staves, one for each voice, and stem direction is normal for each staff; bass clef is used for the bass line and treble clef for the upper three; but here the tenor is written one octave higher than it sounds regardless of whether the clef has a little 8 under it or not.It should also be mentioned that in a String Quartet Open Score the viola normally uses alto clef, though when it plays in its highest register the treble clef is used to avoid excessive use of leger lines; the cello (violoncello) generally uses bass clef but may use the tenor or treble clefs in its highest register for the same reason; so in a string quartet score we find Violin I (soprano) written in treble clef, Violin II (alto) in treble clef, Viola (tenor)) in alto clef (C clef on 3rd line), and Violoncello in bass clef.When we're working with melodic lines written in the alto or tenor clefs it doesn't have to be a sight reading nightmare; like all sight reading, it's part of an organist's education, and doing it is what builds our skill; learning it via the diving board is in fact the experience of most pianists and organists [See blog, Sight Reading].Among organists this is a specialized skill, and there isn't a huge audience clamoring to find out more about it; even so, the American Guild of Organists considers it a standardized skill required for advanced professional certification [See blog, American Guiild of Organists (AGO)].The examination for Associate (AAGO) requires the sight reading of a passage in SATB Open Score (Modern) using treble, octave treble, and bass clefs (photo).The examination for Fellow (FAGO) involves some extraordinary feats of musicianship, including sight reading a passage of SATB Open Score (Older) with those dreaded soprano, alto, and tenor clefs [See blog, Open Score, Part II].This type of reading is a skill closely related to transposition and is, in fact, a form of transposition [See blog, Transposition, Parts I, II].There are absolutely tons of "a capella" (unaccompanied) works for choir; the choir has to learn them, so a big part of a church musician's job at the organ is as an accompanist and to teach the choir their parts from an open score.In this type of reading the eye needs to be trained to scan a wide vertical space, plus play the tenor line an octave lower than written which this is indicated by a small figure "8" below the treble clef in the tenor line (photo).Our eyes need to literally scan a greater vertical distance.It helps to imagine we've backed away from the rack so we can now "see" those 4 separate staves with the same eye-sweep of our SATB Short Score reading habit; this will do as much for reconditioning our eye motor habit as would taking any "psychologically daunting" aura off the task.Here are some tips:Practice incremental building up; scan, read, and play the soprano and bass only; this will get us used to that different range of eye-scan to which we're not yet accustomed.Then switch up the same, reading say, soprano and tenor; that octave transposition is dead easy, but it can be a hiccup until that too becomes reflexive reaction; then try mixed stave pairs.Then do the same with 3 staves, shuffling which you read.If we push ourselves to read the outer voices, or merely the top and bottom, eventually we'll also be able to take in the inner activity.This usually throws everyone for a time, maybe a couple of weeks, after which it becomes reflex.It isn't that far a stretch at all in thinking, but the greater "scan" motor habit of the eye, and that tenor octave business ... we can get familiar with it fairly quickly by breaking it down in this way.It helps to remember that we're only sight reading the first time we look at a piece; after that, we're practicing; if we want to get better at sight reading in open score, the way to do it is by practicing sight reading.It's generally considered best, in preparing for the AAGO examination, to read SATB Open Score (Modern) choral repertoire, perhaps one new choral work a day during the regular practice time.Another approach is to copy out familiar hymns or shorter organ pieces notated in score and review them that way.(con't in Part II)