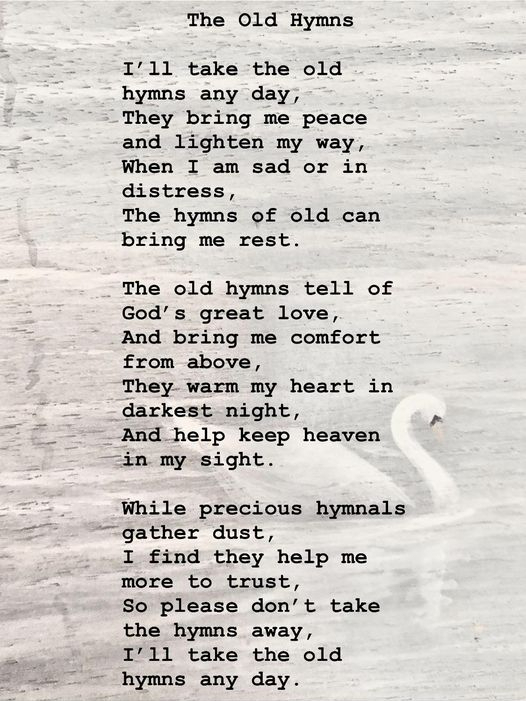 (con't from Part I)It's a very common difficulty for even those organists who are well trained to perform solo repertoire to accompany a singing choir or singing congregation; being an accompanist is actually a true art that's much different from what an organist does when playing solo.One has to first start with the right materials, and a collection of easy to read hymn books is an invaluable resource to an organ scholar.A familiarity with the fixed melody, or cantus firmus (c.f.) of a number of well known hymn tunes is a very good first step to take on the way to learning to improvise [See blog, Improvisation, Parts I-VI].A collection of various hard bound hymnals, especially older, out of print editions in good condition with the music printed in 4 part harmony, is also helpful for locating a specific hymn or musical response.It's important to remember that 4 part hymn settings are not organ music; they are choral music which the organist arranges for performance on the organ, and these make excellent material for studying voice leading, practicing sight reading, learning hymn playing techniques (there are several), and, of course, improvising in the various ways that a hymn tune can be announced.Such hymn books might include the Army/Navy Hymnal, the Hymnal 1940, New Hymnal (old edition), and Hymnbook 1982 of the Protestant Episcopal church of the USA, the Hymnal of the Presbyterian church, the Celebration Hymnal, the Methodist Hymnal, Hymns of the Saints (RLDS), the Christian Science Hymnal, the Baptist Hymnal, the Lutheran Worship Hymnal, the Pilgrim Hymnal, the Hymnal of the United Church of Christ, and the New Century Hymnal, just to name a few. Less expensive copies of most, if not all, of these hymnals can be located over time and purchased for nominal cost at any good used book store; older editions often have a backing which is quite flexible and, when opened, lays quite well on the rack.Nowadays there are also various on line hymnals which can be used without charge to locate, download, and print hard to find hymns and songs.Hymn leading is an essential skill for an organist to develop, so much so that The American Guild of Organists (AGO) considers hymn playing a critically important skill for professional certification [See blog, American Guild of Organists].The AGO provides for 5 levels of professional certification for organists which are of increasing difficulty beginning with the Service Playing Certificate (SPC) and progressing to Colleague (CAGO) certification, Associateship (AAGO) certificate, and finally to the Fellowship (FAGO) certificate which demands some extraordinary feats of musicianship; a Choirmaster (ChM) certificate in choral conducting is also offered.Save for the Fellow examination, hymn playing skills are tested for every one of these levels of proficiency.Again, it's important to realize that, when we're looking at a 4 part hymn setting, it isn't a piece of piano music or organ music.It's vocal music ... choral music that the organist is expected to interpret and make into an arrangement, to adapt it to the organ, which involves an entirely separate set of skills.In the hymnal the hymn is printed on 2 staves in what's called short score; the organist takes the bass line from the bottom staff and plays it on the pedals just as if there were a 3rd bottom staff written in bass clef just for the feet; the left hand meanwhile continues with the tenor line, and the soprano and alto lines are supplied to the right hand.Sometimes, if the distance between the soprano and alto parts cannot be accommodated by the right hand alone, the alto part may be assigned also to the left hand by means of hand division.This is determined when the fingering is worked out.If the hymn tune is soloed in the right hand using a solo registration, the left hand would, of course, take both the alto and tenor parts on a secondary manual.In the beginning, when we're learning this skill, the pedal might be omitted to simplify things a bit, but when we're leading a big congregation the foundation of 16-foot pitch in the pedal is crucial to include because everything tends to "stick together" better that way than by playing without the pedal.One who accompanies a congregation needs to know the hymn extremely well and to be able to play it technically without any difficulty because all of the organist's attention will be focused on listening to the singing and making adjustments, if necessary or appropriate, to give the congregation time to breathe, for example, or perhaps, if they're dragging, to quicken the pace by playing more detached.If we sing the hymn in our mind as we're accompanying, and we're well acquainted with the text, this will tell us where the congregation has to take a breath, and then our accompaniment will know where to breathe, too.In the beginning this might be hard, but then after a while hymns will start to circulate and we will come back to the old ones and build our own hymn repertoire; thus it will get easier and easier with time, practice, and experience.(con't in Part III)