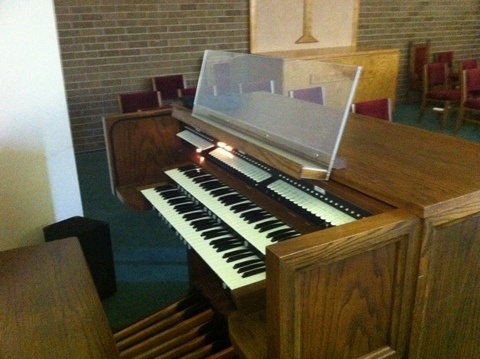 (con't from Part III)If and when the student's interest takes a hard turn to the classical side, it's time to consider a practice instrument for the home that's built and voiced to play classic music.For this purpose, the Baldwin model 636C classical organ (photo) was pretty decent for an analog organ built during the 1980's.It was the top of the line 2 manual organ Baldwin made at the time, and it came with a 5 channel external audio system.This organ used a rather good microprocessor system that handled all the keying, stop control, combination action, transposer, and other console functions.The tones were generated by garden variety frequency components, but the 636 had several sets of oscillators and dividers, which made it sound like it had a more sophisticated generator system than it did.Its sound compared favorably to analog Allen and Rodgers organs.One of the divider sets was tuned very sharp from the rest to drive the celeste stops, and it gave a very rich celeste.The other divider sets were tuned a few cents sharp or flat from each other, so you got an interesting amount of beating among the various stops.The Baldwin engineers even went so far as to draw different octaves of the unit principal from different sources so that adding the 4-foot and 2-foot stops to the 8-foot principal gave a convincing effect of multiple ranks.The stop list was rather complete and standard, much the same as you'd see on a typical Rodgers classical, all the usual stops at the usual pitches, all 4 families of tone plus chimes and harp and a single 32-foot flute in the pedal.The stop action was Baldwin's "Silent Touch."A miniature lamp above each tab indicated when the stop was on.You pushed the tab downward to turn it on and upward to turn it off, just as you would as if they were real moving tabs, which was a nice feature.The tabs were spring loaded and didn't stay up or down; you only knew the stop was on by the lamp burning.This took a little getting used to, but it was better than some lighted systems that had been on the market.The keyboards were quite excellent, firm and steady feeling, not sloppy and springy as on many earlier Baldwin organs.The pedalboard was also better than on some older Baldwin organs, but probably not as sturdy as Allen or Rodgers.Still, this was a perfectly good organ for home practice of classic music, or even for a small church or chapel.About all it left desired, from a student standpoint, was a third manual and perhaps a larger tonal spread.The external speaker system was normally one large woofer cabinet and 2 smaller boxes that each contained 2 channels.So even though it's 5 channels, you'd only get 3 tower speaker cabinets.A hefty 120 watt amplifier was also part of the system.With a full size 32-note AGO pedalboard and 2 full size manuals, this instrument was supplied with a full principal chorus, flutes, reeds, strings (with different celestes on both manuals), super and sub couplers, dual memory combination action with 6 general pistons, 4 pistons per division, toe studs, general cancel plus divisional cancels, divided expression pedals, and a crescendo pedal.This was the fourth step up instrument that one classically trained organist used to continue his journey in organ playing.(con't in Part V)