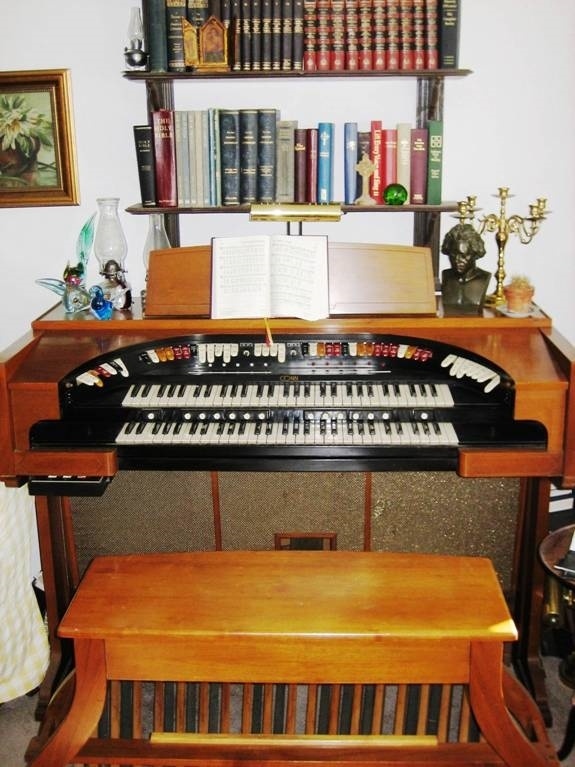 (con't from Part II)Based upon the initial success of the model 640 theatre organ in 1962, the Conn company came out in 1964 with the model 645 deluxe theatre organ (photo).The 645, like the 640, was also a vacuum tube oscillator organ, which gave it a full sound that was very solid.The 645 achieved some advances over the 640, starting with the elimination of the 640's sub and super couplers on the Solo manual which were replaced with independent 16-foot and 4-foot stops in the Solo which could be combined in new and different ways.Another advance was the replacement of the 640's 25 note pedalboard with a full size 32-note AGO pedalboard.The 645 also came with some new, additional voices, such as a 16-foot pedal reed marked "Tuba" and a 1-foot Tibia marked "Fife."It also came with larger 100 watt amplifier and 6 reversible factory preset general pistons with white indicator lights.These fixed general combos were called 1) whispering voxes, 2) voxes and tibias, 3) tibias solo, 4) tuba solo, 5) strings and flutes, and 6) full organ.This instrument, like the 640, also had a built-in 2 speed Leslie speaker running the voxes and tibias and a wonderful theatre organ sound, with the added advantage of being large enough for the practicing of classical music at home, including the works of Bach.All in all, a very fine instrument for the home.This organ was the third step up instrument one classically trained organist used to continue his journey in organ playing.(con't in Part IV)