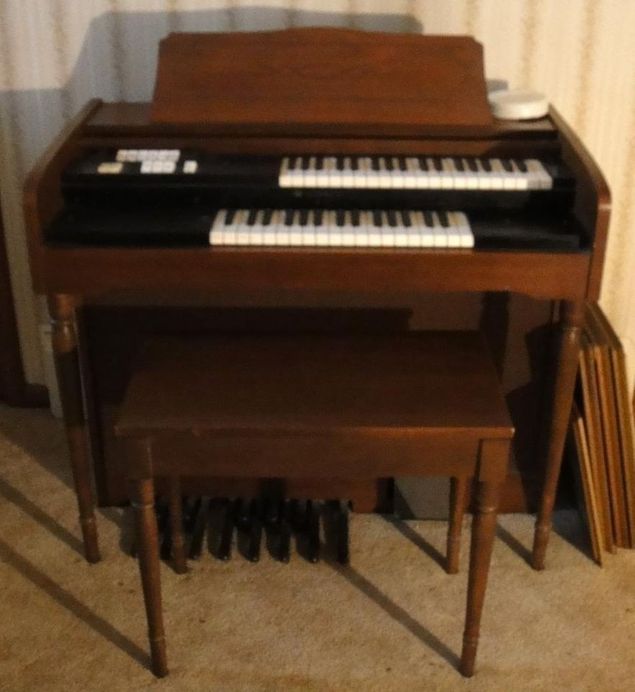 Most electronic home organs built after World War II were compact, relatively inexpensive, and built into a configuration called a spinet organ, which first appeared in 1949.These instruments presented simplified controls and functions that were both less expensive to produce and less intimidating to learn (photo shows a Lowrey Starlet model, c. 1961, the instrument on which one classically trained organist first began his journey in organ playing).The 2 keyboards, or manuals, were typically offset and at least an octave shorter than is normal for organs, inviting but not requiring the new organist to dedicate the right hand to the upper manual and the left hand to the lower, rather than using both hands on a single manual.Since the upper manual typically omitted the bass, and the lower manual typically omitted the treble, this seemed designed to encourage the pianist, who was accustomed to a single keyboard, to make use of both manuals.Stops on these instruments were typically few in number and frequently named after orchestral instruments that they could, at best, only roughly approximate.The loudspeakers were housed within the main instrument.The pedalboard made up of 13 stub pedals normally spanned only a single octave, was often incapable of playing more than one note at a time, and was effectively playable only with the left foot.With the expression pedal located to the right and either partly or fully recessed within the kickboard, it was conveniently reachable only with the right foot.These limitations, combined with the shortened manuals, made the spinet organ all but useless for performing or practicing classic organ music; but at the same time it allowed the novice home organist to explore the challenge and flexibility of simultaneously playing 3 keyboards (2 hands and 1 foot).This arrangement spawned a style of casual organist who would naturally rest the right foot on the expression pedal the entire time, unlike classically trained organists [See blog, "Easy Play" Methods].