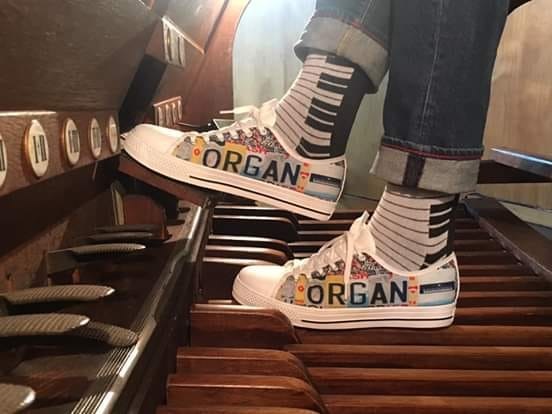 (con't from Part II)It's important to note that some of the finest organists in the world have never worn Organmaster shoes [See blog, Shoes, Part I].Instead they prefer a well made dance shoe having a slightly elevated heel and thin leather sole, such as those made by Capezio [See blog, Shoes, Part IV].In reading about the proper footwear for organ playing, we're led to believe that practicing the organ in chunky shoes is like playing the manuals wearing gloves; this is true, but only partially.Organists in the northern countries at higher latitudes who must play in winter in a frigid, non-heated building often wear thin-knitted gloves with the tips of the fingers cut out.Maybe it would not be possible to play a virtuoso piece very well this way, but these types of gloves are actually quite good for keeping the fingers warm under these conditions during the worship service where the demands on the performer are limited to simple pieces, improvisation, and hymn-playing. It may be argued that hitting the right pedal key on the pedalboard is more a matter of muscle memory than of having the right shoes, especially with toes-only pedalling, but, regardless, our footwear is important.Hitting the right pedal sometimes boils down to how many different organs we play; when we're used to playing on one instrument, really get comfortable with that pedalboard, and then wearing the same shoes we move to the next organ, we may find that we're not hitting the right pedal keys and have to look down until we develop the same sense of "feel" for that pedalboard (photo).In a case like this, accuracy in pedal playing isn't so much a matter of shoes; it's the fact that the pedalboard has changed.Rubber-soled sneakers however, even with a familiar pedalboard, make poor organ shoes regardless of how well suited they may appear to be (photo).The new organist looking for unique footwear would do better to simply settle for the socks.(con't in Part III)