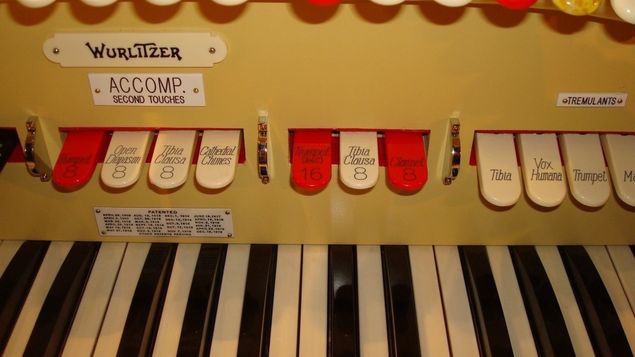 Second touch (2T), also known as Double Touch, is a feature built into the keyboards of certain pipe organs that activates a second set of contacts when the keys are pushed down with a bit more pressure.This device was invented in France by Victor Mustel in 1875 and first applied to pipe organ keyboards by the British builder Robert Hope-Jones in 1886; Hop-Jones was a big promoter of the device and introduced it into many of his electro-pneumatic action organs built around that time.The device is activated when extra pressure from the fingers causes a spring to give way to allow the keys to move about 1/8 inch further down past the first touch position; this admits pressurized air to enter additional ranks of pipes, allowing any voice or part to be emphasized simply by playing the keys with a firmer touch.When a keyboard is so equipped, it allows the performer to create brass accents, counter-melodies, and even solo a fugue subject in any voice simply by pressing the fingers into the keys a little deeper.Second touch stops are provided for each keyboard that has the second touch feature which are supplied by generally shorter stop tongues located on the straight fall board immediately above the uppermost manual.The photo shows an example with 4 labeled second touch stops (left) controlled by the Accompaniment manual and 3 unlabeled second touch stops (center) controlled by the Solo manual.Additional second touch stops (extreme far left, off the photo) would be controlled by the Pedal.By far the most frequent manual where second touch is used in a theatre organ is the Accompaniment; when a Wurlitzer had 3 manuals the bottom two manuals (Great and Accompaniment) and pedals were usually equipped with second touch stops.On the largest 4-manual ("Fox Special") Wurlitzers the bottom 3 manuals (Bombarde, Great, Accompaniment) and Pedal all were supplied with second touch stops; in these instruments the Accompaniment was an 8-foot manual, the Great and Bombarde 16-foot manuals, and the Solo an 8-foot manual.Second touch stops simply do the same job as the first touch stops for the second set of deeper key contacts; this can be demonstrated by turning on some stops for both first and second touch, using a fairly light registration on first touch and picking out something for second touch that will stand out when added to the first touch stops.By playing deeper into the keys we can then hear the 2T stops being added.As stated, this feature is useful for, among other things, adding rhythm to a sustained chord, creating a counter-melody by using it on individual notes of a chord, layering of sounds, or accents.The third volume of "The Art Of Theatre Organ Arranging" in 3 Vols. by Jelani Eddington contain exercises for helping to perfect this skill of second touch technique.