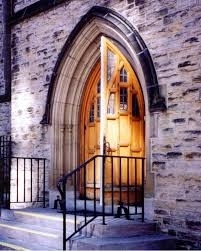 Imagine you're 16 years old, approaching your 17th birthday.You're older now than when you took your first organ lessons with your first teacher, but you're still pretty young, the youngest person in your high school class.Imagine you've spent the last year studying the organ every Friday evening at a fine church with your second teacher, but now, you're going to have to curtail your organ lessons with him for a time in order to concentrate on your senior year of high school in the hopes of getting yourself accepted to college.You've told your teacher you have every intention of resuming your lessons with him once this goal has been achieved.During the time you've spent with him, he's introduced you to a variety of repertoire, got your feet working, and got your hands working at the piano.He's brought you a long way, he's responsible for seeing to it that the foundations of your playing were well in place, you've shown him great promise, and he understands.Imagine leaving your last lesson with him at this age, where you remember him standing in the door of the church with the porch light on ... an image that's engrained in your mind forever, an image you'll never forget ... and he asked you to promise him one thing ... that you'll never give up playing.You agreed.Then, with a smile, he asked you again ... "You promise? ..."And you said, "Yes Henri, I promise."You didn't realize then, that it would be the last time you would ever see him.Imagine a year and a half passing, after which you were accepted to college.You tried to recontact your teacher at the music store where he worked to resume your lessons at the church only to find out, to your awful dismay, that cancer took his life about a year earlier, suddenly, unexpectedly, in his mid-thirties.He was gone ... rudely whisked away in the prime of his life.Only his memory remained.You never even had the opportunity to pay your respects to his widow who moved away and left no forwarding address.Imagine a ton of bricks fell on you.You felt crushed ... annihilated.But you can't give it up without breaking your promise to a wonderful teacher, a superlative human being who was beautifully kind to you, who mentored you, who cared about you too much to leave you the way you were, who believed you, and who believed IN you.Imagine a half century passing since then, in which you've never broken that promise to him.Great promise can breed another great promise.I know.Because that student ... was me.