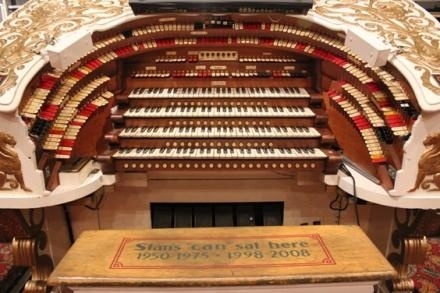 Two methods used by organ builders to expand the tonal possibilities of a pipe organ without increasing the number of pipes are borrowing and unification.The photo shows the horseshoe console of the 4 manual, 36 rank Wurlitzer theatre pipe organ in the Fox Theatre, St. Louis, Missouri, an instrument with 348 stop tablets.Historically, an organ like this with 36 individual ranks of pipes can be expected to have no more than 36 independent stops, with each rank playable only from its own division and manual.With the application of electricity to organ building in the late 19th century, it became possible to electrically couple certain ranks of pipes located in one chamber with another, thus making it possible for those same voices to be playable from more than one manual at the same time, a process called "borrowing."If a single rank of 8-foot pipes is wired to be made playable at more than one pitch (e.g., 16-foot, 8-foot, 5-1/3 foot, 4-foot, 2-2/3 foot, 2-foot, 1-3/5 foot, 1-1/3 foot, 1-foot, etc.), this creates, in this case, 9 stops all of the same quality and strength of tone from the same single rank of pipes, a process called "unification."These are labor and space saving devices used by organ builders to compete in the market place and make a smaller instrument sound and operate like a much larger one.The manuals, or keyboards, in this case no longer control divisions.They each operate a "virtual division" which controls ranks located in every chamber throughout the instrument.Any rank, or set, of pipes in the instrument might therefore be made playable at any pitch , on any keyboard, including the pedal.A limited amount of borrowing and unification, if carried out carefully and with good reason, can be very advantageous in the scheming and design of a pipe organ, such as when certain sub-octave manual stops are grouped together to form a small auxiliary Pedal division, or when an extra sub-octave stop can be created by wiring it to sound the pipes of the unison stop an octave lower and simply extending its compass downward by 12 notes to complete the bottom octave.Any borrowed or unified stops, when drawn in combination with other ranks, are supposed to remain strictly subordinate in strength of tone to the fundamental unison pitch (8-foot for manuals and 16-foot for the pedal) according to the natural laws of musical sounds [See blog, Balance in Organ Playing, Part II].A so-called "8-foot organ" [See blog, Restoration] is one in which every stop in the instrument is derived from ranks of 8-foot pitch by wiring them to be playable at other pitches, via electrical coupling.Most theatre pipe organs built in America from 1911-1942, with few, if any, exceptions, were designed as "8-foot organs."In this type of instrument (since it costs as much to construct the bottom 12 notes of the bass octave as it does all the other pipes in the rank, and space for these 12 largest pipes may not be available), the bass octave for some of the 16-foot manual stops was sometimes wired to break back to the tenor octave for the bottom 12 notes.More commonly, the bass octave wasn't even wired to play some of these stops at all, and these began at tenor C.The remainder of them were extended all the way to the bottom for the express purpose of making them playable as Pedal unison stops, by means of borrowing.The higher pitched stops of the organ, which represent harmonic upper partial tones of the prime, are supposed to decrease in intensity, in accordance with the natural laws of musical sound, as they rise in pitch.This means that, on an "8-foot" instrument having extensive borrowing and unification in its design, care must be exercised when manual choruses are drawn.If, for example, the 16-foot stop is too big, the 4-foot too keen, or the 2-foot too penetrating in comparison with the unison 8-foot stop, search should be made for other stops in building the chorus.This can be tricky.The primary 8-foot stop used for the manual chorus should be of sufficient volume and power to dominate and absorb within its own nature all the harmonic upper partial tones which are added to it, which are represented by the higher pitched stops.That true prime pitch must not be disturbed, no matter what degree of brilliancy or harmonic complexity or richness of coloring might be added to it by the addition of numerous higher pitched stops, as if they were endeavoring to drag the prime tone upward in pitch.This can only be obtained by accurate proportionment of all the upper partial tones of the prime, where the loudness of the higher pitched stops is kept in due subordination.For example, if we accept the strength of the prime tone (8-foot stop) in the chorus to be 100, then we can accept the proportionate value of the 1st upper partial tone represented by the octave (4-foot stop) to be about 70.The proportionate value of the 2nd upper partial tone represented by the twelfth (2-2/3 foot stop) would then be about 60, the 3rd upper partial tone represented by the fifteenth (2-foot stop) would then be about 50, etc., decreasing gradually in strength as the upper partial tones rise in pitch.Organists who try to build a satisfactory chorus out of one unified rank of pipes are working against the natural laws of musical sound, as every stop in the chorus, being derived from the same rank, has the same quality and strength of tone, i.e. 100.This can be counteracted to some extent by drawing some additional 8-foot tone and selecting higher pitched stops which are less assertive in strength for the chorus.