The Lizard Brain, Part I 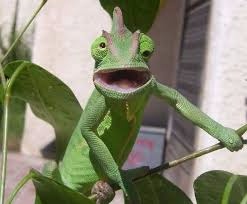 "Go out on a limb -- that's where the fruit is."--Bob RossAs humans, we're hard-wired to allow fear to affect our decision making.Some of us have passed on an opportunity to try something truly exciting because we were afraid we might fail at it; the ironic thing is the fact that, if we don't try, we're already failed; there's really not much to lose, and yet we talk ourselves into believing that by not risking failure we're somehow better off.When we ask ourselves, "Who am I to think that I might achieve this thing?" it comes from a place of humility, which normally is a good thing; but it's also self-deprecating and destructive.There's a tiny part of the limbic system of our brain just above the level of the spinal cord, 2 almond shaped structures that pre-wire us to play it safe like this and avoid taking risks; it's called the amygdala.These 2 tiny, little structures near the brain stem are a primitive leftover from the days when our prehistoric ancestors needed to be protected every day from the perils and dangers of the wild world; one of its functions is the processing of emotions, particularly those associated with survival.When something new or seemingly risky comes along, the amygdala kick into high gear to keep us alive; sometimes that reaction can save our life; far more often it holds us back from a more fulfilling life [See blog, Scarecrow].Not just the fear of bodily harm, but the fear of failure, the fear of embarrassment, the fear of criticism, the fear of shame, the fear of rejection, the fear of inadequacy, the fear of unworthiness ,.. all are processed by the amygdala.This had led author Seth Godin to call the amygdala "the lizard brain" because of its primitive survival function [See blog, The Book, Part II].It's the voice in the back of our head telling us that we're insecure, to back off, to be careful, to go slow, to compromise.Author Steven Pressfield refers to this natural force that's fueled by fear as "Resistance" [See blog, The Book, Part I].That same "voice of the lizard" is selfish, scared (photo), lazy, and not generous at all.In the modern world we no longer typically face those same kinds of perils and dangers to our survival every day, but the lizard brain is still there, and it isn't going away.The practitioner of every creative activity hears it every day.Every artist wrestles with this Resistance, all day long.It's part of us, and that's okay.We hear the voice of the lizard screaming at us at times, telling us we're crazy if we venture to risk the trouble, the failure, the shame, to do something generous, to launch that new venture or enterprise, to begin that new program of advancement or education, to answer that upward calling, to invent or create something new out of nothing and share it with others.The louder it is, against sharing our art, our work, with other people, against us striving to reach that higher level of attainment, the more important it is for us to keep at it, to do that work to elevate, to teach, to inspire others, to reach the objective that we have in view.That same voice, like it or not, is here to stay; it's part of our anatomy and physiology, and our job is to figure out how to quiet it, how to ignore it, but also, and even more importantly, acknowledge its function to guide and direct us to whatever it is that we need to be doing, to achieve the success we have in mind.We can then use it [See Home Page] to remind ourselves, every day, to do the exact opposite of what it's telling us, which will be, for us, the right thing to do.(con't in Part II)